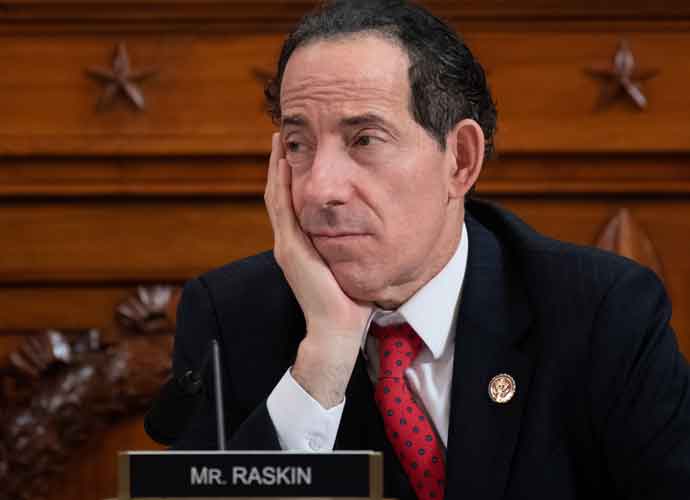 WASHINGTON, DC – DECEMBER 4: Rep. Jamie Raskin (D-MD) listens during testimony by constitutional scholars before the House Judiciary Committee in the Longworth House Office Building on Capitol Hill December 4, 2019 in Washington, DC. This is the first hearing held by the Judiciary Committee in the impeachment inquiry against U.S. President Donald Trump, whom House Democrats say held back military aid for Ukraine while demanding it investigate his political rivals. The Judiciary Committee will decide whether to draft official articles of impeachment against President Trump to be voted on by the full House of Representatives. (Photo by Saul Loeb-Pool/Getty Images)

Holding back tears, Rep. Jamie Raskin (D-Maryland) spoke to the U.S. Senate as the lead House impeachment manager on Tuesday. Recalling the deadly Capitol riots on January 6, Raskin declared, “this cannot be the future of America.”

Raskin explained that both his daughter and son-in-law were on Capitol Hill during the riots. When the two voiced concerns before to going to the Capitol, Raskin told them, “Of course it should be safe; this is the Capitol.” Raskin then said that he and his family were separated once rioters breached the Capitol building.

“I couldn’t get out there to be with them in that office. And all around me people were calling their wives and their husbands, their loved ones, to say goodbye,” said Raskin. “Members of Congress – in the House, anyway – were removing their congressional pins so they wouldn’t be identified by the mob as they tried to escape the violence.”

Raskin continued saying, “Our new chaplain got up and said a prayer for us, and we were told to put our gas masks on. And then there was a sound I will never forget, the sound of pounding on the door like a battering ram. The most haunting sound I ever heard, and I will never forget it.”

Raskin recalled what his daughter said after they were reunited, “You know what she said? She said, ‘Dad, I don’t want to come back to the Capitol.'” Holding back tears, Raskin said, “Of all of the terrible, brutal things that I saw and that I heard on that day, and since then, that one hit me the hardest.”

Raskin’s remarks came after the prosecution’s chilling video showing timeline of events during the Capitol riots and Trump’s apparent encouragement of rioters.