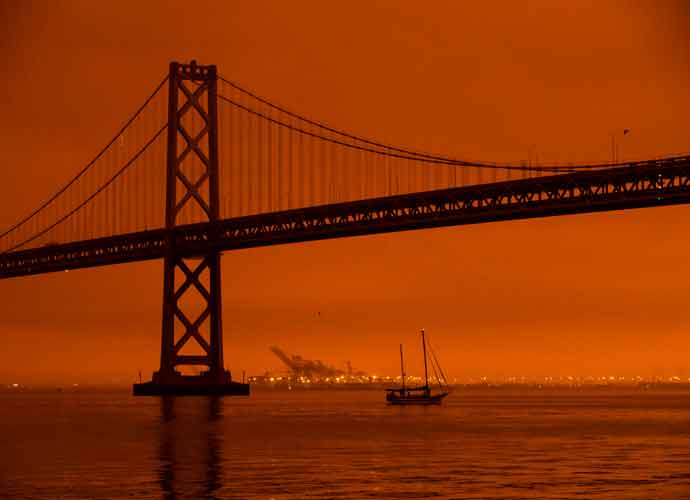 SAN FRANCISCO, CA - SEPTEMBER 09: A ship passes beneath the Bay Bridge as smoke from various wildfires burning across Northern California mixes with the marine layer, blanketing San Francisco in darkness and an orange glow on September 9, 2020 in San Francisco, California. Over 2 million acres have burned this year as wildfires continue to burn across the state.

President Donald Trump has blamed the raging wildfires on the West coast on the states, even going as far as suggesting they rake forests to prevent fire.

“I see again the forest fires are starting,” Trump said at a rally in late August, echoing his comments from 2018 during a prior round of blazes. “They’re starting again in California. I said, you gotta clean your floors, you gotta clean your forests — there are many, many years of leaves and broken trees and they’re like, like, so flammable, you touch them and it goes up.”

He added, “Maybe we’re just going to have to make them pay for it because they don’t listen to us.”

Although Trump has issued emergency funding, it took nearly a month for the fires to make their way onto his Twitter feed. And when he visited California earlier this week, he refused to acknowledge the effects climate change may have had in exacerbating the fires.

Additionally, most of the land where the fires are occurring is federally owned.

CalFire director Thomas Porter showed Trump a map of California’s fires, most of which were in areas colored green.

“All of the green,” Porter told him, “is federal lands.”

Nearly 60% of the forests in California, 25% of the forests in Oregon, and 44%in Washington are national forests. While the federal government is responsible for managing them via the U.S. Forest Service, but federal spending on fire prevention has fallen 24% since 2001: The budget in 2015 was $180 million, compared to 2001’s $240 million.