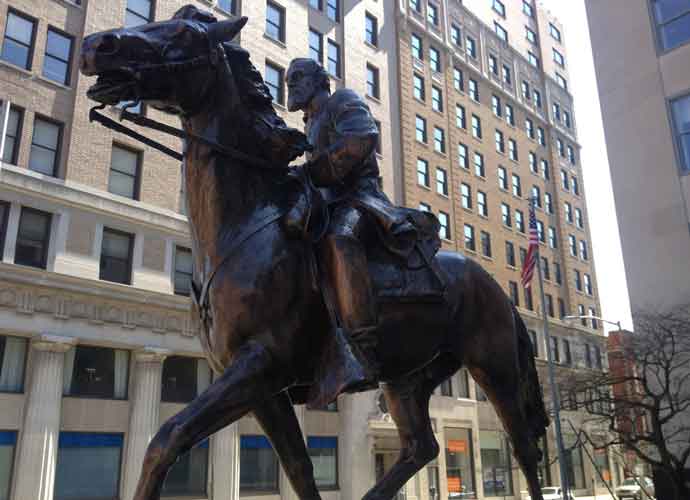 Prof. Steve Gillon: Understand The Racist History Of The Confederate Statues Behind The Charlottesville Riot

The following is a post written by Prof. Steve Gillon in the aftermath of the Charlottesville riot last year.

People have strong feelings about what took place in Charlottesville last year and how the president responded to it. I want to say just a few things about President Donald Trump‘s misuse and misunderstanding of history.

First, while there may be a few people calling for the removal of statutes of Washington and Jefferson because they owned slaves, it has nothing to do with the current debate over the symbols of the Confederacy. Stonewall Jackson, General Lee, Jefferson Davis, etc. were traitors. They took up arms against the Constitution. We have so many heroes who have fought to defeat foreign enemies and to protect the Republic, why use public space to honor people who committed treason?

Second, no one is trying to change history or to sanitize the past. Just the opposite: The history of the Confederacy and those who fought for the South belong in history books and in historical museums. There is not a single credible American history textbook that does not give extensive treatment to the Confederate role in the Civil War.

Third, this is not, as some have suggested, a question of censorship. The question is whether we use public space to honor these people. Private groups and citizens can band together, purchase land, and build all the monuments to the Confederacy they want.

Fourth, many of these monuments were build in the 1890s when white supremacists regained control of Southern governments after Reconstruction. They were part of an effort to rewrite history by claiming they were part of a noble cause and those who fought were heroes. (This is also when many Southerners started claiming (falsely), and continue to claim (falsely), that the war was not about slavery but about states’ rights.) There was also a burst of monument building during the 1950s when many white southerners felt threatened by the emerging civil rights movement. These monuments are not just memorials to Confederate icons, they are symbols of Jim Crow and a celebration of white supremacy.

Fifth, Charlottesville is only the latest flash point in a crisis of white identity. The past five decades have not been kind to heterosexual white men. The moral hierarchy that had existed for centuries came tumbling down. White men in particular now have to compete against African Americans in the workplace, women demand equal treatment in the workplace and at home, and the LGBT community has challenged their definition of manhood. Massive waves of immigration have transformed America’s racial identity. In addition, technological innovation and globalization have destroyed the jobs they once depended on for a living. Their anxiety is real and understandable. The way they express it is not.

Finally, this is not, as Trump and his allies would like to believe, a fight between “the people” and the elites. It is so much more than that. It’s about what we stand for as a nation and what it means to be an American. America is founded on an ideal that was born on a warm June day in 1776 when Thomas Jefferson, sitting in his rented room on Market Street in Philadelphia, penned the immortal words in the Declaration of Independence which stated that “All men are created equal” and that they were endowed with the inalienable rights of “life, liberty, and the pursuit of happiness.” America is a work in progress and the battle in Charlottesville is part of our struggle to live up to Jefferson’s noble but unattainable goal.

Steve Gillon is the scholar-in-residence at The History Channel and a professor of history at the University of Oklahoma. He is the author of a dozen books on modern American history and politics. His most recent book is Separate and Unequal: The Kerner Commission and the Unraveling of American Liberalism (Basic Books, 2018).
Read more about: