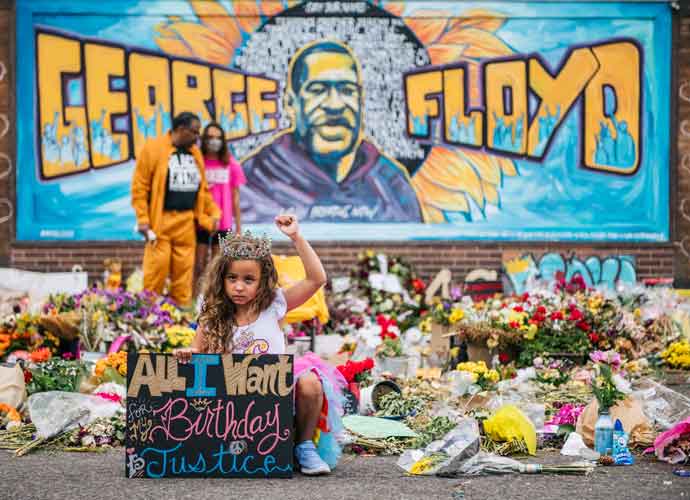 MINNEAPOLIS, MN - JUNE 9: A girl holds her fist in the air while visiting the memorial for George Floyd on June 9, 2020 in Minneapolis, Minnesota. Residents of the community, and people around the world, have come together in calling for an end to police brutality after the death of George Floyd, who was killed while in Minneapolis police custody on May 25th. (Image: Getty)

On Wednesday, the House passed the George Floyd Justice in Policing Act, a reform bill that would ban chokehold and alter so-called qualified immunity for law enforcement.

The vote was 220-212, mostly along party lines, and came nine months after Floyd, a 46-year-old black man, was killed by Minneapolis police officers last spring.

In a debate on the House floor Wednesday night before the vote, Rep. Ilhan Omar (D-Minnesota) said Minneapolis is still traumatized by Floyd’s death. “Time and time again, we have witnessed the people who are sworn to protect our communities abuse their power,” she said.

The trial of Derek Chauvin, the former police officer charged with killing Floyd, is scheduled to begin in Minneapolis on March 8. He is facing second-degree murder and manslaughter charges. The other officers involved in Floyd’s killing will be tried at a separate hearing in August.

A similar version of the bill was passed by the House last year but was never considered by the Republican-dominated Senate. Now, Democrats control the Senate but would have to sway at least 10 Republican members for the bill to pass.

Republicans believe the legislation would prevent police from doing their job effectively. Rep. Carlos Gimenez (R-Florida) said that the bill would “weaken and possibly destroy our community’s police forces during the Senate meeting.”

The Biden administration released the following statement earlier this week, urging the House to vote in favor of the proposal:

“To make our communities safe, we must begin by rebuilding trust between law enforcement and the people they are entrusted to serve and protect. We cannot rebuild that trust if we do not hold police officers accountable for abuses of power and tackle systemic misconduct and systemic racism in police departments.”

Rep. Karen Bass (D-California) spoke about the legislation and its goals. “Never again should an unarmed individual be murdered or brutalized by someone who is supposed to serve and protect them,” she said. “Never again should the world be subject to witnessing what we saw happen to George Floyd in the streets in Minnesota.”

President Joe Biden posted a tweet Monday promoting the bill. “Following Senate consideration, I hope to be able to sign into law a landmark police reform bill,” he said.

I am pleased that the House will vote next week on the George Floyd Justice in Policing Act. I encourage the House to pass it. Following Senate consideration, I hope to be able to sign into law a landmark police reform bill.