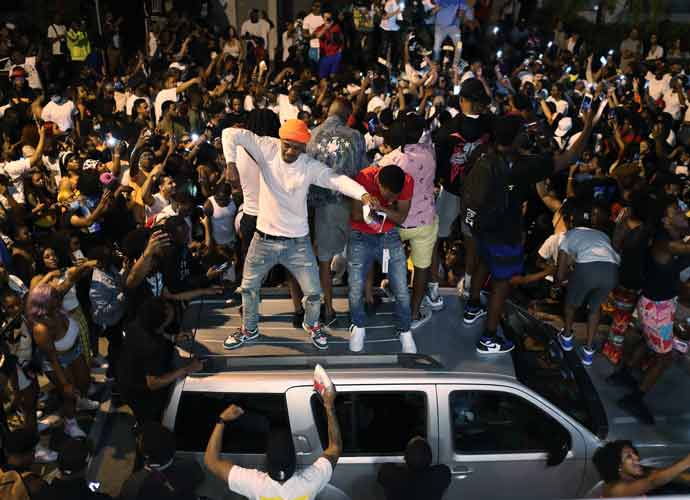 MIAMI BEACH, FLORIDA - MARCH 21: People gather while exiting the area as an 8pm curfew goes into effect on March 21, 2021 in Miami Beach, Florida. College students have arrived in the South Florida area for the annual spring break ritual, prompting city officials to impose an 8pm to 6am curfew as the coronavirus pandemic continues. Miami Beach Police have reported hundreds of arrests and stepped up deployment to control the growing spring break crowds. (Photo by Joe Raedle / Getty Images)

On Saturday night, a police SWAT team moved in on massive crowds of spring breakers who were out past the 8 p.m. curfew in Miami Beach, Florida.

The team fired pepper balls and sirens sounded, which sparked a stampede of people trying to flee the scene on Ocean Drive in South Beach, a very popular party spot.

As the spring breakers were dancing to loud music playing over giant Bluetooth speakers, a cop over the loudspeaker yelled, “Everyone needs to leave the area. The curfew started at 8 p.m. You need to disperse.” When the crowd was kicked off of Ocean Drive, they immediately moved to the next block and continued the party.

The number of people injured in the chaotic scene and the number of arrests made is still unknown.

Hours earlier, the city declared a state of emergency, announcing that authorities would enforce a curfew each night beginning Saturday and major roads into Miami will be closed from 9 p.m. to 5 a.m.

The decision to intact a curfew was caused by street parties turned violent in recent days, people brawling on the street and using restaurants’ outdoor dining tables and chairs. A fight that occurred on Thursday night at a restaurant on Ocean Drive ended in multiple arrests.

The party-goes seemed unfazed on Saturday when the police rolled in.

Miami Beach Mayor Dan Gelber blamed out-of-towners for the new curfew and the chaos during a press conference on Saturday. “I love that this is a beautiful place, that people come here to gather and enjoy our weather and our beaches. But right now, it has become too challenging in the tourism industry to continue that way.”