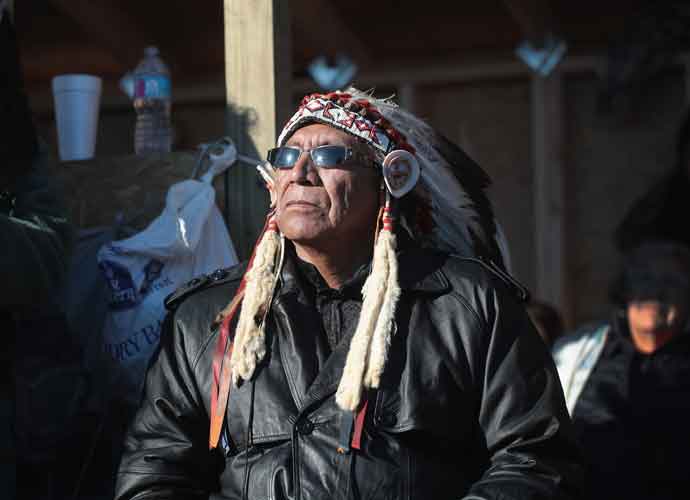 CANNON BALL, ND - DECEMBER 04: Chief Arvol Looking Horse of the Lakota/Dakota/Nakota Nation listens to speakers during an interfaith ceremony at Oceti Sakowin Camp on the edge of the Standing Rock Sioux Reservation on December 4, 2016 outside Cannon Ball, North Dakota. Native Americans and activists from around the country have been gathering at the camp for several months trying to halt the construction of the Dakota Access Pipeline. Today the US Army Corps of Engineers announced that it will not grant an easement for the pipeline to cross under a lake on the Sioux Tribes Standing Rock reservation, ending the months-long standoff. The proposed 1,172-mile-long pipeline would transport oil from the North Dakota Bakken region through South Dakota, Iowa and into Illinois. (Photo by Scott Olson/Getty Images)

Last November, leaders of the Turtle Mountain Band of Chippewa and Spirit Lake Nation wrote a letter to the governor asking state legislators to reconsider a proposal for a new North Dakota legislative map days before the bill was to be introduced into the state house.

They argued that the map did not allow for indigenous people’s voices to be heard, but the map still passed a Republican-majority legislature and Republican Gov. Doug Burgum signed the bill into law.

Now, two Republicans, District 4 chairman Chuck Walen and Paul Henderson, who is considering running for a chair in District 9, have sued the state for what they say “was racial gerrymandering for which race was the predominant factor” and violation of the Equal Protection Clause of the Constitution. Their respective districts both encompass reservations.

The lawsuit, which was filed earlier this month, accuses the map of “cracking and packing.” It argues that the lines are drawn to pack Indigenous voters to one district and divide other Indigenous voters into two districts that are “dominated by white voters who bloc vote against Native Americans’ preferred candidates.” Instead of giving Indigenous voters a chance to elect two candidates to represent them, they only have the opportunity to elect one.

“We never want to enter into lawsuits; we never want to do these things,” said Jamie Azure, who is a chairman for the Turtle Mountain Band of Chippewa, told The Guardian. “But, you know, at a certain point, the goodwill just goes out the window. And, you know, we’re tired of being disrespected. And that’s how we feel with this lawsuit.”

The state has not commented on the lawsuit.