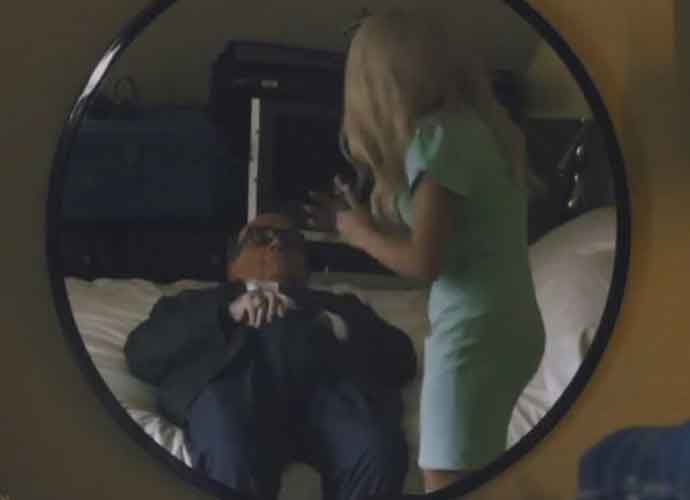 Trump attorney Rudy Giuliani fell for a set-up by comedian Sacha Baron Cohen, whose follow-up to Borat, shows Giuliani reaching into his pants while lying on a bed while the actor playing Borat’s daughter was in the room.

The film, set to be released on Friday, features Borat’s daughter posing as a TV journalist and a fake conservative interview with Giuliani. The two enter the bedroom of hotel suite, rigged with hidden cameras, and Giuliani begins seemingly touching himself.

After news of the scene broke, Giuliani defended himself in a radio interview, telling WABC that he was only trying to take off his microphone.

“I had to take off the electronic equipment,” Giuliani said. “And when the electronic equipment came off, some of it was in the back and my shirt came a little out, although my clothes were entirely on. I leaned back, and I tucked my shirt in, and at that point, at that point, they have this picture they take which looks doctored, but in any event, I’m tucking my shirt in. I assure you that’s all I was doing.”

He noted he “was fully clothed at all times” and believed the interview with Borat’s daughter, played by Maria Bakalova, was real. And despite the video footage that attempts to make Bakalova look underage, she is actually 24, and the events leading to Baron Cohen’s interruption appear consensual.

“This guy comes running in, wearing a crazy, what I would say was a pink transgender outfit,” Giuliani later recounted to the New York Post. “It was a pink bikini, with lace, underneath a translucent mesh top, it looked absurd. He had the beard, bare legs, and wasn’t what I would call distractingly attractive.”

The police found no crime had been committed, and Giuliani later realized what had happened.

“I only later realized it must have been Sacha Baron Cohen. I thought about all the people he previously fooled and I felt good about myself because he didn’t get me,” he said.

The film’s premise centers largely on the U.S. election, with Borat attempting to bribe an ally of President Donald Trump at the instructions of the Kazakh government.

The film, released on Amazon Prime 11 days before Election Day, ends with a message encouraging viewers to vote.