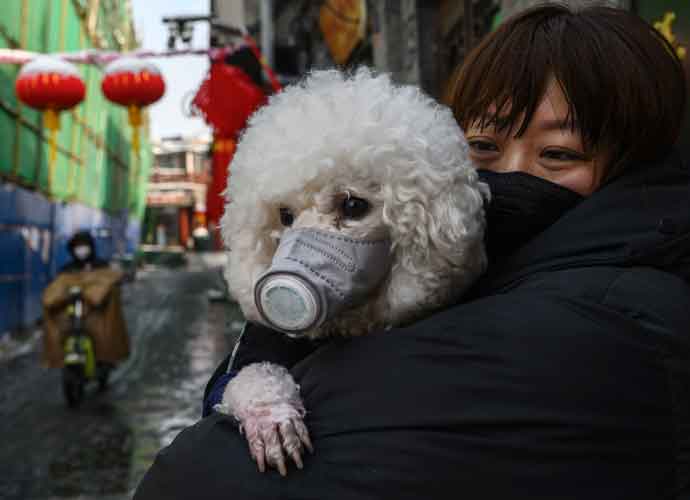 BEIJING, CHINA - FEBRUARY 07: A Chinese woman holds her dog that is wearing a protective mask as well as they stand in the street on February 7, 2020 in Beijing, China. The number of cases of a deadly new coronavirus rose to more than 31000 in mainland China Friday, days after the World Health Organization (WHO) declared the outbreak a global public health emergency. China continued to lock down the city of Wuhan in an effort to contain the spread of the pneumonia-like disease which medical experts have confirmed can be passed from human to human. In an unprecedented move, Chinese authorities have put travel restrictions on the city which is the epicentre of the virus and municipalities in other parts of the country affecting tens of millions of people. The number of those who have died from the virus in China climbed to over 636 on Friday, mostly in Hubei province, and cases have been reported in other countries including the United States, Canada, Australia, Japan, South Korea, India, the United Kingdom, Germany, France and several others. The World Health Organization has warned all governments to be on alert and screening has been stepped up at airports around the world. Some countries, including the United States, have put restrictions on Chinese travelers entering and advised their citizens against travel to China. (Image: Getty)

On Monday, the drug company Moderna announced that its COVID-19 vaccine that it has been busy working on has an effective rate of 94.5% in their trials, allowing them to join Pfizer in the race for a  coronavirus vaccine.

Both companies are expected to apply to the Food and Drug Administration (FDA) to receive an “emergency use” authorization to vaccinate around 20 million first responders, as well as the elderly in nursing homes, considering these groups are some of the highest at risk for contracting the disease that has killed about 1.2 million internationally.

With 11 million infected and 246,000 deaths in the United States, which holds the highest number of cases and deaths of any country, the need for a vaccine is now more urgent than ever. A recent spike in cases has caused many states to go back into a form of lockdown, restricting numbers of people in social gatherings and closing down bars, restaurants, gyms and schools.

Moderna’s 94.5% effective vaccine comes after Pfizer reported last week that its vaccine, created in collaboration with the German company BioNTech, was over 90% effective. The FDA has stated that they would approve a vaccine with just a 50% effective rate, so the success of these two vaccines is unprecedented.

“I had been saying I would be satisfied with a 75 percent effective vaccine,” said Dr. Anthony Fauci, director of the National Institute of Allergy and Infectious Diseases. “Aspirationally, you would like to see 90, 95 percent, but I wasn’t expecting it. I thought we’d be good, but 94.5% is very impressive.”

In order to test a vaccine, researchers must inject some of those infected with the vaccine, and some of those in the trial receive a placebo, a treatment that isn’t any sort of medication. In Moderna’s case, only 5 of the 95 studied that were infected with coronavirus were given the vaccine, and the other 90 were given a shot of saltwater (the placebo). Eleven of the 95 cases were severe, all of which were in the placebo group. The group of 95 was also diverse in age and race; 15 of the group were 65 or older, and 20 people were Hispanic, black, Latino or multiracial.

Dr. Fauci and Dr. Francis Collins, the director of the National Institutes of Health, shared at a briefing that this did not mean people should forego precautionary measures to prevent the contraction or the spread of the coronavirus. They shared that Americans should continue wearing their masks and avoiding large social gatherings.

The vaccine, a huge breakthrough in the race against COVID-19, is also an enormous breakthrough in the vaccine and science worlds as well. If approved, it will be the first vaccine approved by the FDA of its kind. The vaccine uses messenger RNA of the coronavirus to train the body’s cells to copy fragments of the virus. In doing so, it teaches the body that, if any cells of the virus do invade the body, the immune system is programmed to attack it. This is also a much faster creation of a vaccine than ever seen previously.

The questions still surrounding the vaccines include the length of time that the vaccine creates immunity in the human body, and how effective it is for older people (65 and over). Researchers still don’t know if the vaccine can prevent the spread of the virus to other people. If someone who’s had the vaccine that comes in contact with COVID interacts with someone who hasn’t been vaccinated, researchers want to see if their immunity would prevent the spread of it to the un-immune. If so, this would eliminate the need for widespread distribution, as the numbers would begin to decline with any number of those vaccinated.

One of the drawbacks of the vaccines is that both must be kept at extremely low temperatures in order to be effective. This could make distribution really difficult in warm, low-income areas, as there would not be the resources needed to keep vaccines at such low temperatures. The colder temperature allows the vaccine to have a shelf life of 30 days, according to Moderna. If kept at room temperature, it will only last 12 hours.