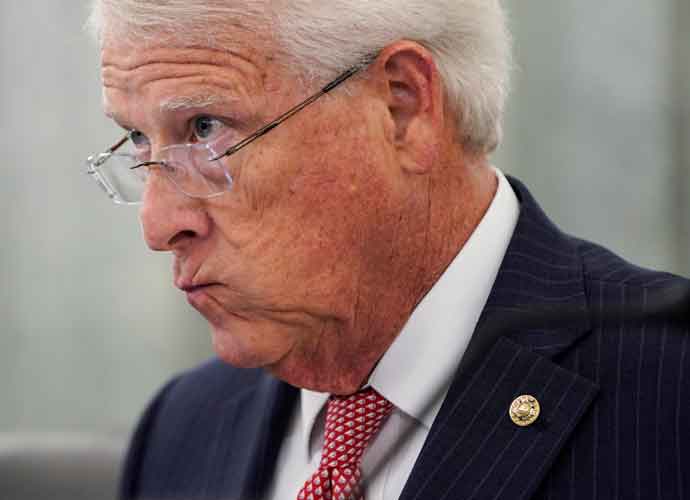 WASHINGTON, DC - NOVEMBER 03: Senator Roger Wicker (R-MS) listens as FAA Administrator Stephen Dickson speaks during a hearing before the Senate Committee on Commerce, Science and Transportation on November 3, 2021 in Washington, DC. Dickson said that Boeing still has more work to do in the wake of the crashes of two 737 MAX jets. (Photo by Joshua Roberts/Getty Images)

Republican Sen. Roger Wicker of Mississippi suggested to a local radio station on Friday that President Joe Biden‘s nominee to the Supreme Court could be a “beneficiary” of affirmative action.

Biden has long promised to nominate a black woman to the high court.

Wicker said the reason for his concern is that the Supreme Court is currently hearing affirmative action cases and it would be a conflict to be sitting with someone who benefitted from it.

“The majority of the court may be saying writ large that it’s unconstitutional. We’ll see how that irony works out,” he said.

“When the previous president followed through on his own promise … Senator Wicker said, ‘I have five granddaughters, the oldest one is 10. I think Justice Amy Coney Barrett will prove to be an inspiration to these five granddaughters and to my grown daughters.’ We hope Senator Wicker will give President Biden’s nominee the same consideration he gave to then-Judge Barrett,” Bates said.

Although still unnamed, Biden’s nominee has gotten mixed reactions from the opposing party.

Some, like Republican Sen. Lindsey Graham (South Carolina), are supportive.

“Put me in the camp of making sure the court and other institutions look like America. You know, we make a real effort as Republicans to recruit women and people of color to make the party look more like America. Affirmative action is picking somebody not as well qualified for past wrongs,” Graham said on CBS’s Face the Nation.

Wicker said that he just hopes Biden nominates someone that “will not misinterpret the law.”

Biden’s nominee “will probably not get a single Republican vote,” Wicker added.

Biden said he will publicly announce his nominee in February.