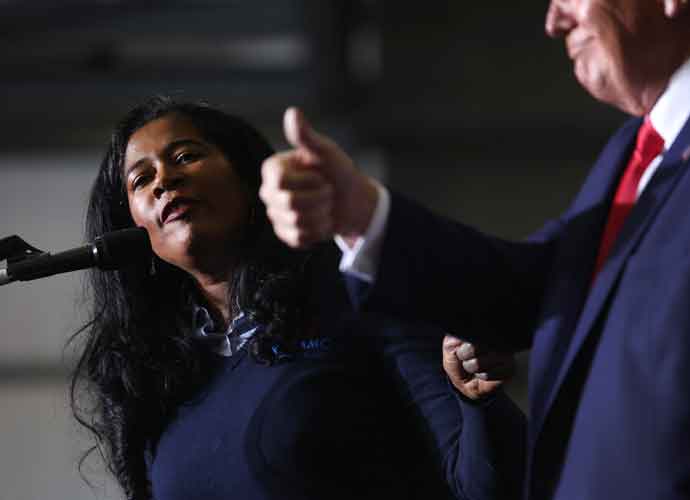 WASHINGTON, MICHIGAN - APRIL 02: Kristina Karamo, who is running for the Michigan Republican party's nomination for secretary of state, gets an endorsement from former President Donald Trump during a rally on April 02, 2022 near Washington, Michigan. Trump is in Michigan to promote his America First agenda promote several Michigan Republican candidates. (Photo by Scott Olson/Getty Images)

Kristina Karamo, who is the Republican nominee running for secretary of state in Michigan, threatened to kill her family when her ex-husband filed for divorce, according to court records.

“There have been incidents in which mother has threatened to harm the children and/or herself, including an occasion in which she attempted to wrestle control of the vehicle while father was driving with the children in the back and crash it, saying ‘F- it, I’ll kill us all,'” the document, which was part of a motion to negotiate parenting time, from October 7, 2021, reads.

Karamo, who is endorsed by former President Donald Trump, has since denied the allegations, calling them “categorically false.” She also noted that she has had full custody of her children since her divorce in 2014.

“Media entities and my opponents are desperate so they want to push false allegations with ZERO evidence,” she said in a statement. “They are terrified of this movement uniting Michiganders of diverse beliefs and backgrounds that will save this state!”

“I love my children; I have forgiven my ex-husband, and I look forward to serving the citizens of Michigan,” the Republican candidate added.

My response to categorically false allegations. The desperate attempts to try and ruin our movement has hit a new low. pic.twitter.com/uzaK71PAuw

Karamo has been a stout supporter of Trump, echoing his claims of a stolen 2020 election.

When Trump endorsed her, he wrote, “Good luck Kristina, and while you’re at it, check out the fake election results that took place in the city of Detroit.”

She will be facing off against Michigan Secretary of State Jocelyn Benson (D) in November.