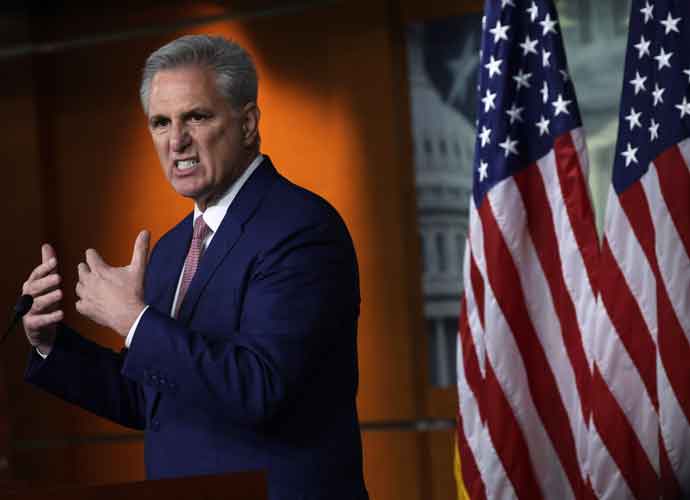 House Minority Leader Kevin McCarthy (R-California) — who was recently nominated to become the next Speaker when Republicans take control of the House in January — called for the resignation of Homeland Security Secretary Alejandro Mayorkas, criticizing how he has handled the immigration crisis at the southern border.

McCarthy’s remarks come at a moment he’s under pressure from a group of right-wing Republicans pushing him to adopt a more aggressive stance to investigate top officials of President Joe Biden‘s administration.

“Our country may never recover from Secretary Mayorkas’ dereliction of duty. This is why today I am calling on the secretary to resign,” he said during an event at the southern border in El Paso, Texas. “If Secretary Mayorkas does not resign, House Republicans will investigate every order, every action and every failure. And we will determine whether we can begin an impeachment inquiry.”

Rep. Marjorie Taylor Greene (R-Georgia), a far-right member who endorsed McCarthy, is exerting her leverage on the situation.

This should give conservatives a glimpse of the kind of Speaker Kevin McCarthy will be and why I’m supporting him.
He’s demanding Mayorkas resign or face investigations leading to impeachment bc the cartels run our border

Greene reportedly struck a deal with top Republicans who promised her that the party will investigate House Speaker Nancy Pelosi and the Department of Justice over their treatment of defendants jailed for their participation in the Jan. 6, 2021, attack on the U.S. Capitol.

At the event in El Paso, McCarthy focused his criticism on what he considers security issues at the border.

“We spent the day with border agents,” McCarthy said at a news conference following their visit. “I asked each and every one that this border is secure. They laughed. They said it is not; it is one of the worst points in the history of this nation.”

In response to McCarthy’s comments, Secretary Mayorkas said in a statement he does not intend to resign and stood up by his work, urging Congress to come up with solutions.

“Secretary Mayorkas is proud to advance the noble mission of this Department, support its extraordinary workforce, and serve the American people. He has no plans to resign,” a DHS spokeswoman said in a statement. “The Department will continue our work to enforce our laws and secure our border, while building a safe, orderly, and humane immigration system. Members of Congress should come to the table and work on solutions for our broken system and outdated laws, which have not been overhauled in over 40 years.”