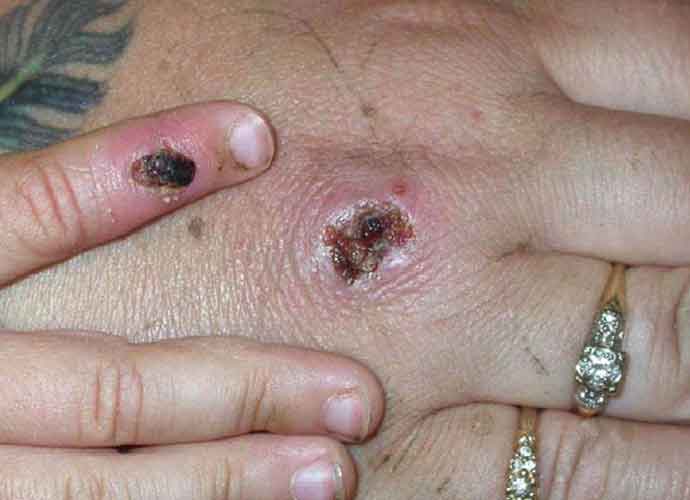 In this Centers for Disease Control and Prevention handout graphic, symptoms of one of the first known cases of the monkeypox virus are shown on a patient?s hand June 5, 2003. The CDC said the viral disease monkeypox, thought to be spread by prairie dogs, has been detected in the Americas for the first time with about 20 cases reported in Wisconsin, Illinois, and Indiana. (Photo Courtesy of CDC/Getty Images)

The first case of the monkeypox in the U.S. in 2022 was found in a Massachusetts patient and confirmed by the Centers for Disease Control and Prevention on Wednesday, sparking concern over the rising number of cases in the United Kingdom.

Since the first case in the U.K. on May 7, six more have sprung up in the area. Two cases have common contacts, but most of the cases show no connection to the others. The Massachusetts patient had recently traveled to Canada, where they are investigating a possible 13 cases of monkeypox.

Monkeypox is a viral infection that was first discovered in laboratory monkeys in 1958. It was first known to affect humans in 1970. Throughout the year, the virus has mainly affected those who have traveled to or live in west and central Africa. It is not easily transmissible and the symptoms are usually mild.

Symptoms include “fever, headaches, muscle aches, exhaustion, swollen glands and a rash, according to Britain’s National Health Service. The rash then turns into raised bumps on the skin, before turning into scabs that fall off. The illness usually lasts between two and four weeks, according to the CDC.

Transmission from animals can occur if a human is bitten by an affected animal, touch an infected animal or consume it. Transmissions between humans are a rarity but are possible through close contact through skin lesions, contaminated bed sheets or clothes.