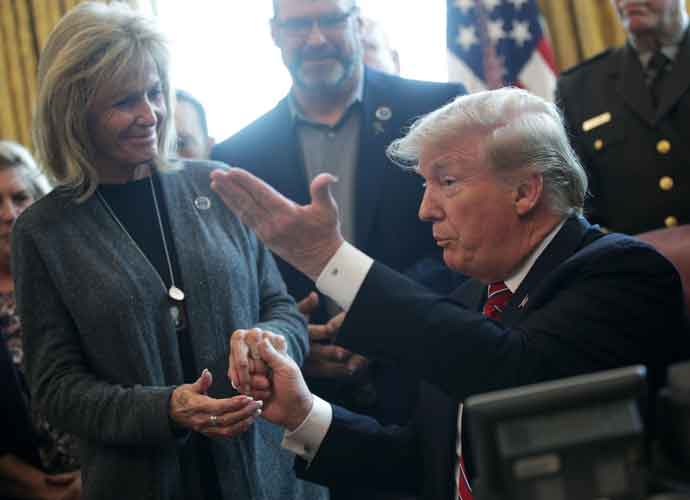 Mary Ann Mendoza, an “angel mom” scheduled to speak during the second night of the Republican National Convention, was pulled from the program hours before, after she shared an anti-Semitic, QAnon conspiracy thread on Twitter.

The tweet told her approximate 40,000 followers to “do yourself a favor and read this thread.”

The lengthy thread from a QAnon conspiracy theorist @WarNuse established a covert effort by Jews to take over the world. The thread alleged that the prominent Jewish banking family from Germany, the Rothschilds were working to make non-Jewish “goyim destroy each other” and “rob the goyim of their landed properties.”

The thread claimed Jewish bankers support world wars and want to enslave non-Jews, in addition to a slew of other unfounded charges. The thread claimed the Titanic had been sunk in order to protect the Federal Reserve and that every president between John F. Kennedy and Donald Trump was a “slave president.”

Mendoza, whose son passed away in 2014 after being hit by a drunk driver who was in the U.S. illegally, apologized for “not paying attention” to the thread’s message after the Daily Beast published their article.

“That does not reflect my feelings or personal thoughts whatsoever,” Mendoza tweeted.

However, she tweeted something similar in 2018.

Her account is now private, but screenshots show she wrote: “The Rothschilds have used their globalist media mouthpiece to declare that Donald Trump is threatening to destroy the New World Order!”

Late-canceled @GOPconvention speaker Mary Ann Mendoza, who boosted an anti-Semitic Qanon thread about the Rothschilds, says it "does not reflect my feelings or personal thoughts whatsoever.”

It would appear that it does. pic.twitter.com/yDaRcFyjr8

She has also played on anti-Semitic stereotypes herself, referencing Democratic billionaire George Soros in several tweets.

In June 2019, she tweeted that Soros and the Rothschilds were pushing for increased immigration to create a “one world government.”

“These are the violent types of people that SOROS, the ROTHCHILDS (sic) and the United Nations have NO problem using as pawns and uprooting them and bringing them to the USA to accomplish their ONE WORLD GOVT!” Mendoza tweeted.

And three months later, Mendoza tweeted that Soros, a Holocaust survivor, is a “Nazi.”

“This Nazi is still at it & the progressives love him for it,” she wrote.