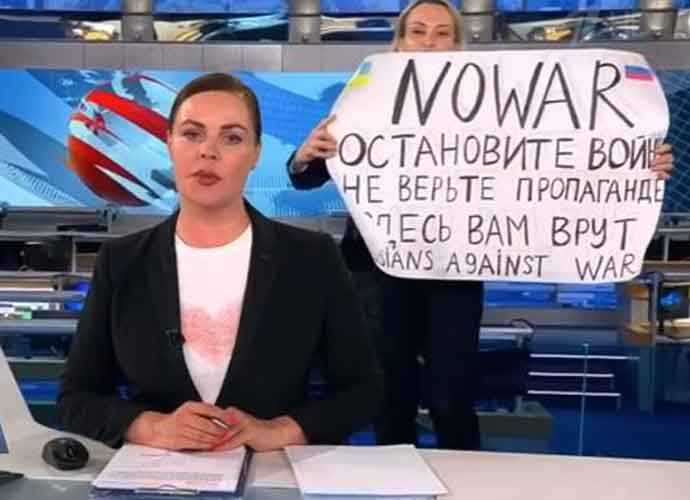 Maria Ovsyannikova, an editor at a major Russian-state television network, interrupted her network’s live broadcast carrying a sign that read “No War” while shouting warnings to viewers that they were being lied to.

The sign continued with the caution, “Don’t believe the propaganda” and “They are lying to you here.”

Ovsyannikova was taken into custody, and of Tuesday morning, there is no news regarding her whereabouts.

After her arrest, a pre-recorded message from Ovsyannikova was released through an independent human rights group.

“My father is Ukrainian, my mother is Russian. They were never enemies,” the editor said.

She expressed remorse for working for Channel One and progressing Kremlin propaganda.

“I am very ashamed of it,” she continued. “Ashamed of telling lies from the TV screen. Ashamed that I [was] allowed to zombify Russian people.”

“What is happening now in Ukraine is a crime, and Russia is an aggressor country, and only one person is responsible for this aggression. This man is Vladimir Putin,” she added in the short video.

Coverage of Ovsyannikova’s protest is being censored in Russia.

“To give you an idea of how sweeping the wartime censorship laws are in Russia: Novaya Gazeta, Nobel laureate Dmitry Muratov’s paper, published a picture of Ovsyannikova’s protest that looks like this,” Moscow Bureau Chief at the Financial Times Max Seddon wrote in a tweet.

To give you an idea of how sweeping the wartime censorship laws are in Russia: Novaya Gazeta, Nobel laureate Dmitry Muratov’s paper, published a picture of Ovsyannikova’s protest that looks like this pic.twitter.com/ydzuVQ19eR

Ovsyannikova adds to the long list of Russians who have been arrested for speaking out against the war after the Kremlin made it a federal crime to call the Ukraine invasion a “war.” The act carries up to a 15-year prison sentence.