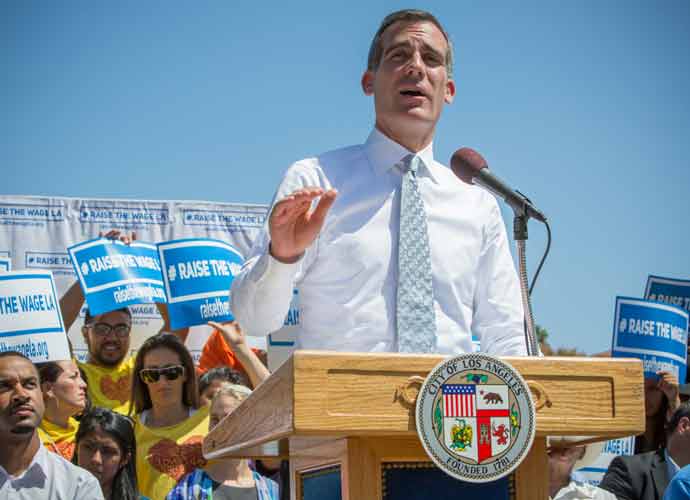 Los Angeles Mayor Eric Garcetti recently signed an anti-camping law, which prohibits people from living on the street in some public areas, sparking activists to camp outside the mayor’s mansion on Thursday evening.

Though nearly all of the 15 City Council members voted in favor of the new legislation, protestors still remain hopeful, calling on Garcetti to rescind the law.

Many view the new anti-camping ordinance as another means to clear homeless encampments, such as those in Echo Park Lake, Venice and the San Fernando Valley.

Protestors placed signs outside of Garcetti’s mansion in an attempt to raise awareness about the “sweeping” of homeless encampments: “House keys not handcuffs,” “Your sweeps are violent, we well not be silent!” and “Sweeps = death.”

About two dozen protesters are gathering in front of Eric Garcetti’s house just a few hours after the LA mayor signed an anti-camping law that activists say criminalizes homelessness and poverty. pic.twitter.com/AQ6NGC3Tmh

Tommy Kelly, an organizer for Street Watch LA, a tenants rights group, commented on Garcetti’s recent move. “I think that Garcetti signed the bill earlier today so that he could avoid the backlash, like, ‘Protesters, you don’t have a reason to protest anymore.’ Either that, or he’s desperate to criminalize homeless people,” said Kelly.

The homeless population of Los Angeles has increased over the past year, due to the COVID-19 pandemic and the housing affordability crisis.

This new law could make over 40% of the city off-limits to homeless people, according to UCLA researchers. And many public areas, such as homeless shelters, tunnels, bridges, daycares, schools and parks may be subject to the “sweeping” of campers.

“Someone called it ‘Such a horrific parting gift to the city of Los Angeles,'” Kelly said. “I hope that he gets, or feels it somehow, some negative feedback for callously and quickly criminalizing people.”

Garcetti was recently named U.S. Ambassador to India by President Joe Biden. He is now awaiting confirmation by the U.S. Senate.