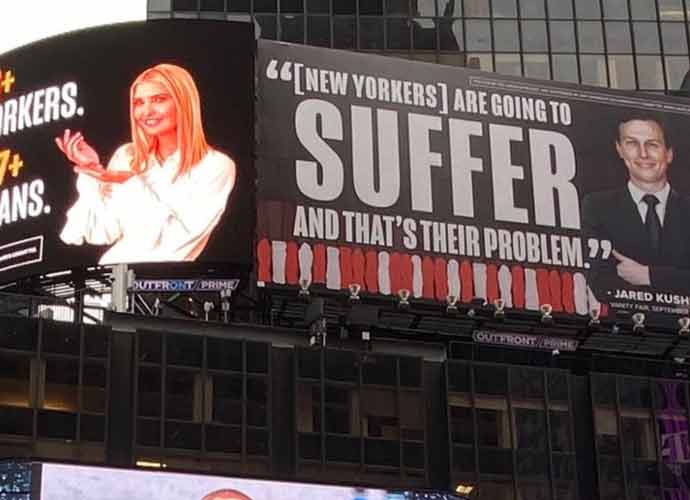 Ivanka Trump and Jared Kushner are threatening to sue the Lincoln Project, a political action committee composed of Republicans trying to prevent the reelection of President Donald Trump, over new billboards put up in Times Square that attack the couple for the White House coronavirus response.

The billboards feature an edited photo of Ivanka smiling and gesturing at coronavirus death tolls in both New York and the U.S. The original photo was a selfie she tweeted in July while holding a can of Goya black beans. Next to the billboard of the president’s daughter is one of her husband standing next to body bags and a quote from a Sep 17 Vanity Fair article that reads, “[New Yorkers] are going to suffer and that’s their problem.”

Marc Kasowitz, the couple’s attorney, responded to the “false, malicious and defamatory” billboards in a letter, demanding they be taken down. He threatened to sue “for what will doubtless be enormous compensatory and punitive damages” if the Lincoln Project does not comply. “Of course, Mr. Kushner never made any such statement, Ms. Trump never made any such gesture, and the Lincoln Project’s representations that they did are an outrageous and shameful libel,” the letter said.

The Lincoln Project took to Twitter to respond to Kasowitz’s remarks: “The level of indignant outrage Jared Kushner and Ivanka Trump have shown towards The Lincoln Project for exposing their indifference for the more than 223,000 people who have lost their lives due to their reckless mismanagement of COVID-19 is comical. While we truly enjoy living rent free in their heads, their empty threats will not be taken any more seriously than we take Ivanka and Jared.”

Jared and Ivanka have always been entitled, out-of-touch bullies who have never given the slightest indication they have any regard for the American people.

We plan on showing them the same level of respect.

Despite the fact that coronavirus cases are continuing to spike in regions across the country, the Trump administration is continuing to schedule campaign rallies as Election Day quickly nears.