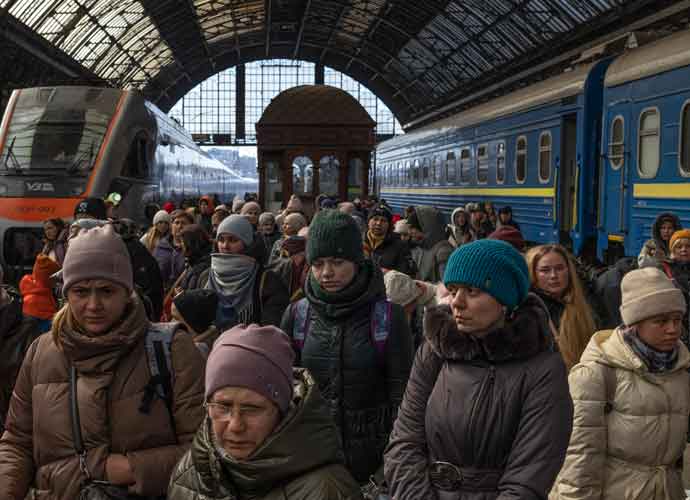 LVIV, UKRAINE - MARCH 11: Passengers depart the railway station after disembarking trains from the east on March 11, 2022 in Lviv, Ukraine. More than two million people have fled Ukraine following Russia's large-scale assault on the country, with hundreds of thousands of Ukrainians passing through Lviv on their way to Poland. (Photo by Dan Kitwood/Getty Images)

Kyiv Mayor Vitali Klitschko warned that Russia may use chemical weapons in their attack on Ukraine.

“They have a target, they have a goal, with any price to be in Kyiv,” he said. “I hope it’s not they use chemical weapons against the civilian population. With any price, they want to win.”

On Sunday, the U.S. Pentagon reported that the U.S. has not seen signs that Russia is poised for an “imminent chemical or biological attack right now.”

Speculation about potential chemical warfare began after Russia accused the U.S. of owning and operating biolabs in Ukraine earlier this week. The White House adamantly denied the claim.

Accusing the U.S. is “a tell that they themselves may be preparing to do so, and then trying to pin the blame on someone else,” White House national security adviser Jake Sullivan told CNN.

The White House was joined by NATO in warning that the Moscow-backed conspiracy could be a cover for an attack of their own.

On Friday, U.S. President Joe Biden warned that Russia would pay a “severe price” if they decided to use chemical weapons. When asked what that price might be, White House press secretary Jen Psaki didn’t name specifics.

“That would be a conversation that we would have with our partners around the world, but there’s no question if Russia were to decide to use chemical weapons, there would be a severe reaction from the global community,” Psaki told reporters.

White House press sec. Jen Psaki to @marykbruce: “There’s no question: if Russia were to decide to use chemical weapons, there would be a severe reaction from the global community.” https://t.co/LWfOaEAQV6 pic.twitter.com/E2IONWxfyq