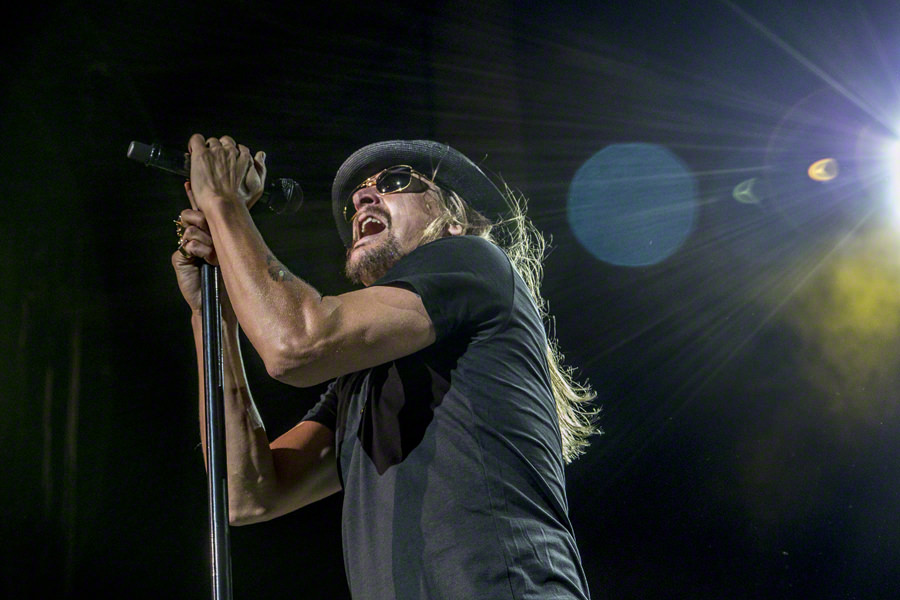 Kid Rock brought politics to the stage during a warm-up show Wednesday while preparing for his Detroit concert run.

KID ROCK GETS POLITICAL ON STAGE

The singer has still given no definitive word on whether or not he will make a run for U.S. Senate next year, but continues to mix into the political realm. He worked up a rhyming, profanity-ridden stump speech, slamming things from “deadbeat dads” to the men who “take a knee” during the national anthem at football games. His speech came after a version of “Hail to the Chief,” after which he spoke from behind a podium with female dancers waving American flags behind him.

The concert took place in Grand Rapids, Michigan, and the crowd cheered and documented the moment on their smartphones. He applauded single mothers, but also called out those who “can’t even take care of themselves but keep having kid after…kid.” Additionally, he slammed people who “call me a racist ’cause I’m not [politically correct],” and added that they “think you have to remind me that black lives matter,” and then passionately condemned Nazis, bigots, and the KKK. He ended the speech with, “If ‘Kid Rock for Senate’ has got folks in disarray, wait ’til they hear ‘Kid Rock for President of the U.S.A.!'”

A vocal supporter of Donald Trump, Kid Rock has increasingly placed himself in the political sphere, and now his concerts are becoming a platform for his possible campaign. He was under fire by some for bringing a confederate flag onstage in the past. He was also criticized for condemning former football quarterback Colin Kaepernick and his decision to sit during the national anthem. Rock has made it clear that he will not back down from his views.

As Rock prepares for a six-show stint at Detroit’s Little Caesar’s Arena, the National Action Network’s Detroit chapter has vowed to picket all of the concerts in protest. On Wednesday in Grand Rapids, hundreds of “Kid Rock for Senate ’18” tee-shirts could be seen on fans entering the arena. More were being sold at merchandise booths for $30 a piece. Some fans interviewed saying they were excited for the senate run, but mostly they were just excited for a night rock-rap-country music with the star.