Kanye West Announces 2024 Presidential Campaign, Asks Trump To Be His V.P. Full view NEW YORK, NY – DECEMBER 13: (L to R) President-elect Donald Trump and Kanye West stand together in the lobby at Trump Tower, December 13, 2016 in New York City. President-elect Donald Trump and his transition team are in the process of filling cabinet and other high level positions for the new administration. (Photo by Drew Angerer/Getty Images) 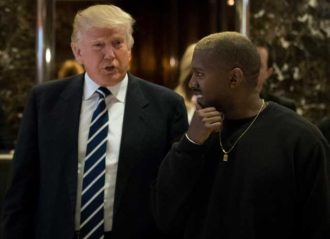