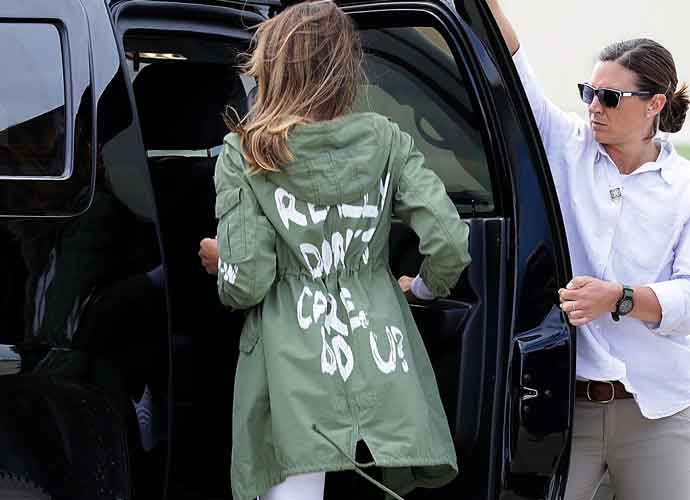 JOINT BASE ANDREWS, MD - JUNE 21: U.S. first lady Melania Trump (C) climbs back into her motorcade after traveling to Texas to visit facilities that house and care for children taken from their parents at the U.S.-Mexico border June 21, 2018 at Joint Base Andrews, Maryland. The first lady is traveling to Texas to see first hand the condition and treatment that children taken from their families at the border were receiving from the federal government. Following public outcry and criticism from members of his own party, President Donald Trump signed an executive order Wednesday to stop the separation of migrant children from their families, a practice the administration employed to deter illegal immigration at the U.S.-Mexico border. (Photo by Chip Somodevilla/Getty Images)

In an attempt to distance itself from Trump-era “revenge” litigation, the Justice Department has thrown out a lawsuit intending to confiscate profits from the book, Melania and Me, written by Stephanie Winston Wolkoff, who served as an aide to Melania Trump and wrote about her experiences with the first lady.

The suit, filed in October, was thrown out Monday by a federal judge. While former Justice Departments have pressed litigation against CIA agents who disclose classified information, Winston Wolkoff’s book does not detail any national secrets, nor does it involve law enforcement at all.

Dozens of former White House aides have written books on their experiences, and none have faced legal consequences. Winston Wolkoff signed a nondisclosure agreement with the White House in 2017. An anonymous Justice Department told Politico, “The Department evaluated the case and concluded that dismissal without prejudice was in the best interests of the United States based on the facts and the law.”

The extremely brief document submitted by the Justice Department on Monday said only, “Please take notice that Plaintiff voluntarily dismisses this action pursuant to Federal Rule of Civil Procedure 41(a)(1)(A)(i),” and was submitted by Acting Assistant Attorney General Brian Boynton.