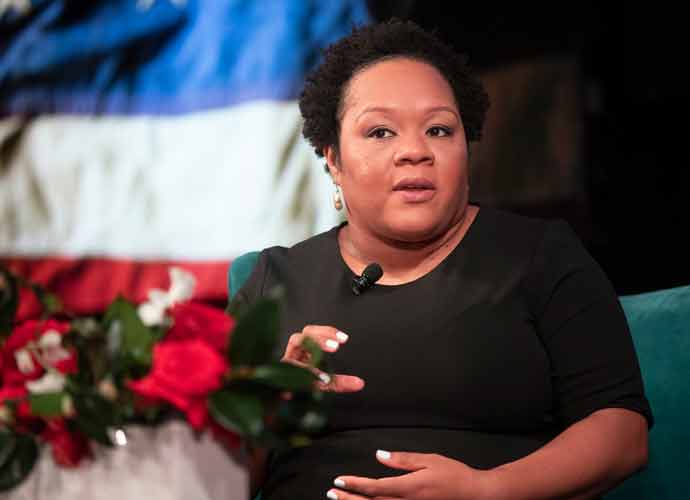 A White House staffer took the microphone away from PBS White House correspondent Yamiche Alcindor after she asked about comments President Donald Trump made in which he doubted governors’ estimates for medical equipment needed to combat the coronavirus pandemic.

“I think that a lot of things are being said that are more, I don’t think certain things will materialize, a lot of equipment is being asked for but I don’t think they’ll need,” Trump told Fox News’  Sean Hannity, later noting that New York had requested 30,000-40,000 ventilators for COVID-19 patients.

When Alcindor inquired about those comments, Trump called her question “threatening” and refused to answer it.

After the mic was taken away from her, CNN reporter Jeremy Diamond handed it back to her for her followup question, which Trump answered.

Jemele Hill, a contributing writer for The Atlantic, tweeted: “Couldn’t be prouder of [Alcindor] for refusing to be intimidated. This is real journalism. What’s sad is that she has to take this on a regular basis from this condescending a**hole.”

Couldn’t be prouder of @Yamiche for refusing to be intimidated. This is real journalism. What’s sad is that she has to take this on a regular basis from this condescending asshole. https://t.co/l4jJtjnV8Z

Totally legitimate question from @Yamiche about what Trump said to Hannity about ventilators. Fair game.

CNN’s John Hardwood commended Diamond for handing the microphone back “so she could resume the questioning that Trump earlier cut off with false and inappropriate tirade.”

bravo to my @cnn colleague @JDiamond1 for, once called on, handing microphone to @yamiche so she could resume the questioning that Trump earlier cut off with his false and inappropriate tirade