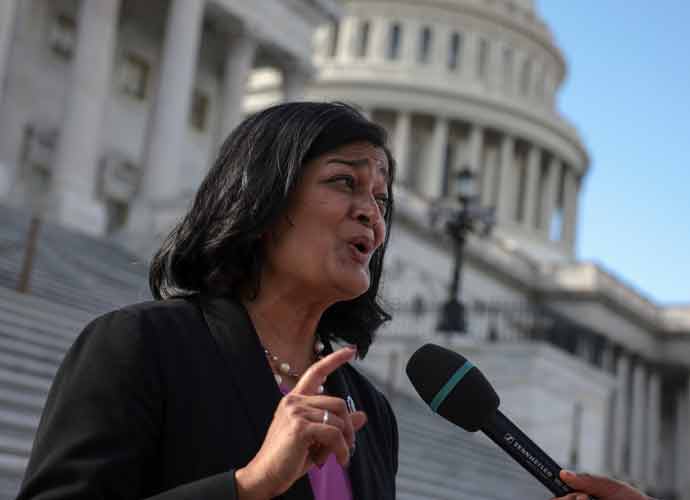 WASHINGTON, DC - SEPTEMBER 23: Rep. Pramila Jayapal (D-WA) speaks to reporters outside of the U.S. Capitol on September 23, 2021 in Washington, DC. Lawmakers continue to work towards coming to an agreement to pass legislation to fund the government by the new fiscal year deadline on September 30th. (Photo by Anna Moneymaker/Getty Images)

Rep. Pramila Jayapal (D-Washington) said she opposes including the Hyde Amendment in a sweeping budget reconciliation bill, another complication Democrats will face amid the difficult negotiations regarding the sweeping spending bill. The Hyde Amendment bans organizations receiving government funds to counsel women on abortion.

“Let’s just wait, this is a negotiation and we’ve got to continue to move this forward, but the Hyde Amendment is something that the majority of the country does not support,” Jayapal told CNN. “One in four women have had an abortion and need to have reproductive care in a very, very important time when those protections are being rolled back.

Her comments are likely to bring a backlash from moderate Democrats.

“That is nobody’s business,” she said. “It is our business as people that carry the babies. And you know, we have to be able to make the choices during our pregnancy.”

In 2019, President Joe Biden announced at a Democratic National Committee event that he doesn’t support the Hyde Amendment, though he had previously supported it.