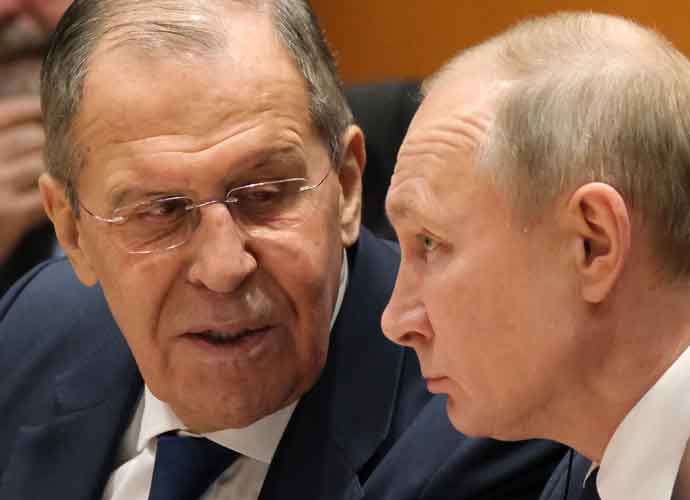 BERLIN, GERMANY - JANUARY 19: Russian President Vladimir Putin (R) and Russian Foreign Minister Sergey Lavrov (L) attend the main session at an international summit on securing peace in Libya at the Chancellery on January 19, 2020 in Berlin, Germany. Leaders of nations and organizations linked to the current conflict are meeting to discuss measures towards reaching a consensus between the warring sides and ending hostilities. (Photo by Sean Gallup-Pool/Getty Images)

Russia has falsely justified its invasion of Ukraine as “denazifying” the country.

“So when they say ‘How can Nazification exist if we’re Jewish?’ In my opinion, Hitler also had Jewish origins, so it doesn’t mean absolutely anything. For some time we have heard from the Jewish people that the biggest antisemites were Jewish,” Lavrov said on an Italian television program over the weekend.

Israel has condemned Russia but has stayed neutral by not formally punishing Russia for their invasion of Ukraine through sanctions. Israeli Foreign Minister Yair Lapid criticized Lavrov’s statement as being “unforgivable and outrageous” as well as a “terrible historical error.”

“Jews did not murder themselves in the Holocaust,” he added. “The lowest level of racism against Jews is to accuse Jews themselves of antisemitism.”

Foreign Minister Lavrov’s remarks are both an unforgivable and outrageous statement as well as a terrible historical error. Jews did not murder themselves in the Holocaust. The lowest level of racism against Jews is to accuse Jews themselves of antisemitism.

Israel Communications Minister Yoaz Hendel announced that he would not allow “the cheapening of the Holocaust” in a Sunday comment.

Ukrainian officials were quick to denounce Lavrov’s comments as well.

Presidential adviser Mykailo Podolyak wrote in a Tweet that “Moscow is simply looking for arguments to justify the mass murders of Ukrainians.”

#Lavrov's direct anti-Semitic statements, accusations of Jews of the WWII and the Holocaust are the evidence of Russia being a successor to Nazi ideology.
By trying to rewrite history, Moscow is simply looking for arguments to justify the mass murders of Ukrainians. (1/2)