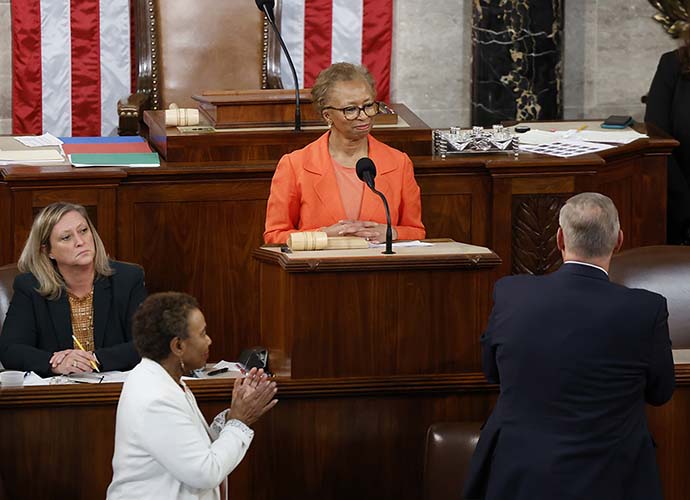 WASHINGTON, DC - JANUARY 05: U.S. House Clerk Cheryl Johnson receives a standing ovation in the House Chamber during the third day of elections for Speaker of the House at the U.S. Capitol Building on January 05, 2023 in Washington, DC. The House of Representatives is meeting to vote for the next Speaker after House Republican Leader Kevin McCarthy (R-CA) failed to earn more than 218 votes on several ballots; the first time in 100 years that the Speaker was not elected on the first ballot. (Photo by Anna Moneymaker/Getty Images)

As failed ballots for House speaker pile up, House clerk Cheryl Johnson has been filling in for the important role.

Rep. Kevin McCarthy (R-California), who has served as the House minority leader since 2019, has been unable to reach the 218 vote threshold needed to become the next speaker over the past three days. A group of some of the most right-leaning House Republicans has stood in his way, saying they’re done continuing on with the status quo.

Meanwhile, members of both parties have praised Johnson’s performance over the past few days as she has kept order in the House.

“Let me express my deep appreciation, and appreciation of everybody in this room, for the work you’re doing Madame Clerk,” Rep. French Hill (R-Arkansas) said before nominating McCarthy for Speaker.

His remark was followed by a standing ovation.

Rep. Ro Khanna (D-California) even suggested Johnson may be a good nominee for House speaker.

“Cheryl Johnson, the clerk of the House, for Speaker?” Khanna wrote on Twitter. “She’s been extraordinary without any rules passed and in having some sense of fairness and order.”

Cheryl Johnson, the clerk of the House, for Speaker? She’s been extraordinary without any rules passed and in having some sense of fairness and order.

Johnson was named House clerk in 2018 by former House Speaker Nancy Pelosi (D-California). House clerks are mainly responsible for administrative duties. Her tasks also included being the person who hand-delivered the articles of impeachment against former President Donald Trump.

Johnson has worked in the House for almost 20 years. Prior to her role as clerk, she served as counsel for the committee on education and the workforce and the subcommittee on libraries and memorials.

Though Johnson has become a well-known name over the past three days of negotiations, her time as House clerk will soon come to an end as the next House speaker will name their own clerk.