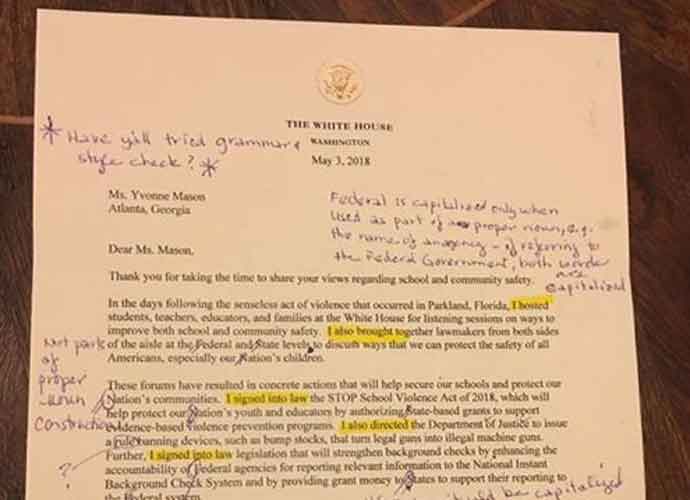 President Donald Trump has gained a reputation for not having the best spelling and grammar when writing letters, public addresses or tweets, and now a retired high school English teacher has slammed Trump’s grasp of the written English language.

The teacher, Yvonne Mason, first received attention two weeks ago after she posted on Facebook a photo of a letter signed by the president. Mason retired last year after teaching in South Carolina for 17 years.

The letter from Trump — dated May 3 — was personally addressed to Mason and concerned gun violence in schools in the wake of several mass shootings like the one in Parkland, Florida on Feb. 14. Mason had reportedly asked the White House to listen to her views on “school and community safety.” She had reportedly asked the president to meet with the families of the victims of the Parkland massacre.

The teacher lambasted Trump for hs improper spelling and grammar, among other style errors.

“Have y’all tried grammar and style check?” Mason wrote at the top of the page. Upon correcting the letter, she added in her post that she would mail it back to the president.

“When you get letters from the highest level of government, you expect them to be at least mechanically correct,” Mason told South Carolina’s The Greenville News.

Mason added she believed the letter may have been written by a White House staffer and not by Trump himself.