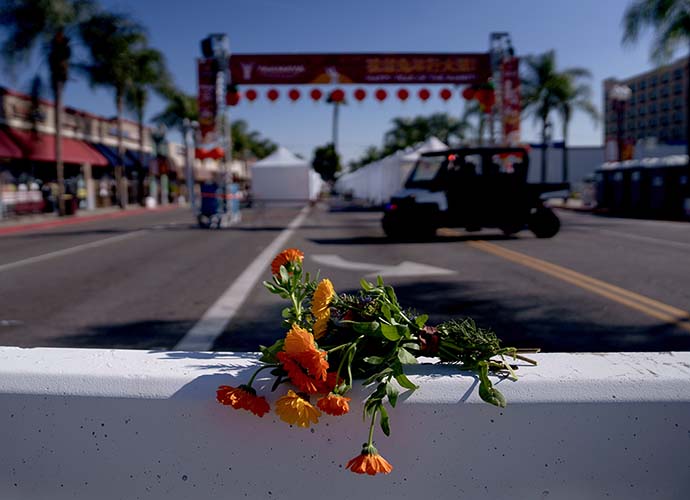 MONTEREY PARK, CA - JANUARY 22: Flowers are placed near the scene of a deadly mass shooting on January 22, 2023 in Monterey Park, California. 10 people were killed and 10 more were injured at a dance studio in Monterey Park near a Lunar New Year celebration on Saturday night. (Photo by Eric Thayer/Getty Images)

Five men and five women were slain during Saturday’s celebrations in two dance halls. Police believe that the victims were all in their 50s and 60s and added they were all “probably” of Asian descent.

Ten more were injured and taken to the local hospital.

Police Chief Scott Wiese called the devastation of the first dancehall a “scene of carnage.”

“They came across a scene none of them have prepared for,” Wiese said of his officers. “There were injured people inside and dead people inside. My young officers did their job.”

The gunman entered a second dancehall seemingly intent on more carnage when bystanders disarmed him. He was believed to be seen carrying a semi-automatic weapon with bump stocks, both illegal in the state of California.

Asian-American immigrants heavily populate Monterey Park. Many residents were celebrating the Lunar New Year during the shooting; 2023 is the year of the rabbit.

The violence in Monterey Park is another deeply unsettling example of violence perpetuated against the Asian-American community. It also illustrates the brutality of the U.S.’s gun violence epidemic.

According to the Gun Violence Archives, a non-profit organization that compiles violent crime figures from 7,500 police station records across the U.S., the shooting is the 33rd mass shooting in the U.S. in 2023. The archives define a “mass shooting” as a gun-violence event where at least four victims are hurt or killed by a gun.

Monterey Park’s violence is the deadliest in the U.S. since the Uvalde, Texas, shooting in May 2022 that killed 22.