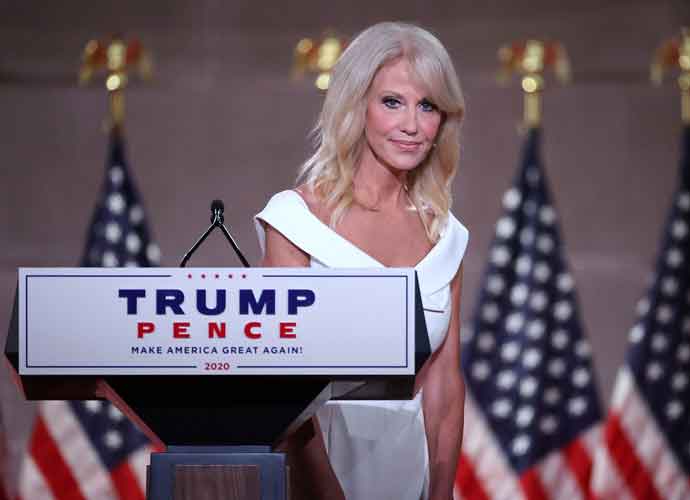 WASHINGTON, DC - AUGUST 26: White House Counselor to the President Kellyanne Conway pauses between takes while pre-recording her address to the Republican National Convention from inside an empty Mellon Auditorium on August 26, 2020 in Washington, DC. The novel coronavirus pandemic has forced the Republican Party to move away from an in-person convention to a televised format, similar to the Democratic Party's convention a week earlier. (Image: Getty)

The Hatch Act forbids government officials from using their power to influence and affect the outcomes of elections.

“OSC received over 100 complaints alleging that the senior Trump administration officials described in this Part violated the Hatch Act by using their official authority or influence to interfere with or affect an election. In essence, each allegation was that the subject official campaigned on behalf of President Trump’s reelection while acting within the scope of his or her official duties,” the report states.

More than a dozen individuals who served under Trump were identified by the OSC as having allegedly “violated the Hatch Act over the course of 18 different official interviews or media appearances. In each case, the subject official was identified by their official title, discussed administration policies and priorities related to their official duties, and/or spoke from the White House grounds,” OSC alleges. “Accordingly, the subject officials were acting in an official capacity when making the statements described in this subsection.”

A speech given by former Secretary of State Mike Pompeo at the Republican National Convention in August 2020 – despite numerous warnings about its potential illegality – was identified by OSC as a particularly egregious Hatch Act breach.

“OSC concludes that Secretary Pompeo violated the Hatch Act in two instances. First, he did so by authorizing a last-minute change to State Department policy for the purpose of promoting President Trump’s reelection. And second, he did so by devoting nearly the entirety of his RNC speech to discussing matters within his purview as Secretary of State, thereby using his official authority in furtherance of President Trump’s reelection,” OSC wrote.

“Secretary Pompeo’s speech was focused almost exclusively on the work of the State Department. In less than four minutes he discussed seven major Trump administration foreign policy decisions,” the report says. “His reference to his wife and son at the beginning of the speech appears intended to convey that he was speaking in a personal capacity. But even assuming that were true, Secretary Pompeo nevertheless violated the Hatch Act by repeatedly discussing the Trump administration’s foreign policy accomplishments.”

OSC also concluded that Trump’s White House “tacitly or expressly approved of senior officials violating the Hatch Act by campaigning for President Trump’s reelection. This conclusion is based upon the administration’s refusal to hold officials accountable for their violations, the frequency and similarity of the violations, and the fact that some administration officials repeatedly ignored the advice OSC provided to them.”