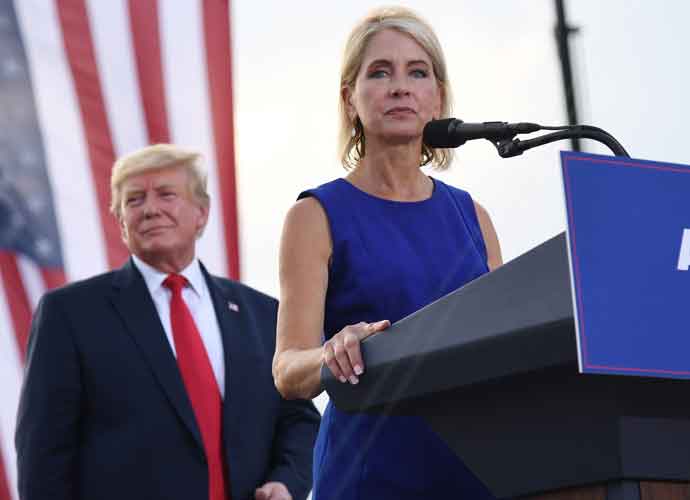 MENDON, IL - JUNE 25: U.S. Representative Mary Miller (R-IL) gives remarks after receiving an endorsement during a Save America Rally with former US President Donald Trump at the Adams County Fairgrounds on June 25, 2022 in Mendon, Illinois. Trump will be stumping for Rep. Mary Miller in an Illinois congressional primary and it will be Trump's first rally since the United States Supreme Court struck down Roe v. Wade on Friday. (Photo by Michael B. Thomas/Getty Images)

During a rally held by Donald Trump meant to celebrate the overturning of Roe v. Wade, Rep. Mary Miller (R-Illinois) said in a speech that the recent ruling was a “victory for white life.”

After a speech from GOP gubernatorial candidate Darren Bailey, Miller went on stage where she proclaimed, “On behalf of all the MAGA patriots in America, I wanted to thank you for the historic victory for white life in the Supreme Court yesterday.”

After her statements, Miller’s slip-up got strong backlash from many on social media.

Her campaign spokesperson, Isaiah Wartman, said that the reason behind her comments was that she misread her speech.

“She very clearly meant to say ‘victory for Right to Life’ during her remarks,” he said. “To suggest that she is somehow not committed to defending all life is disgusting,”

Miller had also made questionable comments in the past when she said that Hitler “was right about one thing.”

During a session with WCIA-TV, Miller stated, “Hitler was right on one thing. He said,’ Whoever has the youth has the future.'”

She later apologized and backtracked on her comments after several state Democrats wanted her to resign.