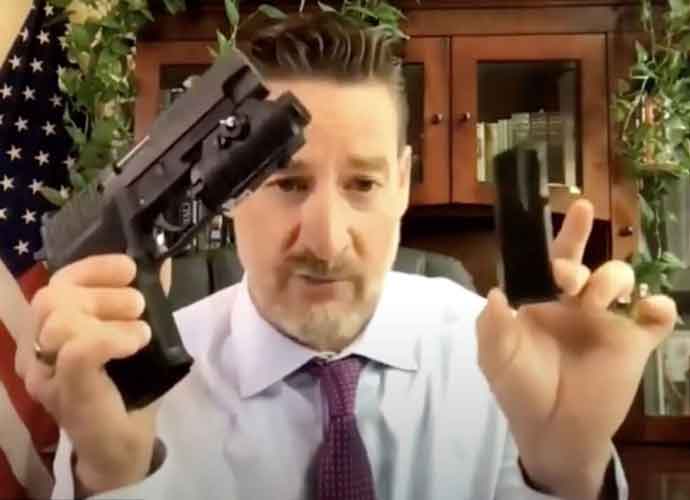 The meeting commenced on Congress’ weeklong recess to discuss the eight gun control measures of the “Protect Our Children Act” following last week’s mass shooting at Robb Elementary School in Uvalde, Texas, that left 19 children and two teachers dead. Some of the measures include upping the legal age to purchase semi-automatic rifles from 18 to 21 and strengthening the regulations on ghost guns and bump stocks.

“Here’s a gun I carry every single day to protect myself, my family, my wife and my home,” Steube said, participating in the meeting remotely from his home.

“This is an XL Sig Sauer P365. It comes with a 15-round magazine. Here’s a seven-round magazine, which would be less than what would be lawful under this bill if this bill were to become law,” he said, warning that although the proposed bill would not outlaw handguns, the banned magazines would indirectly make it impossible to load a handgun.

“I hope the gun is not loaded,” Lee interjected from the background.

“I’m at my house. I can do whatever I want with my guns,” Steube responded.

Steube: "I'm at my house. I can do whatever I want with my guns." pic.twitter.com/FRc1yezjw2

Steube’s demonstration drew backlash from other colleagues as well.

“This is who Republicans are,” Rep. Eric Swalwell (D-California) commented. “Kids are being buried and they’re bragging about how many guns they own during our gun safety hearing,” he said. “They are not serious. They are a danger to our kids.”

Watch his full speech below.

Tonight, I’m addressing the nation on the recent tragic mass shootings, and the need for Congress to pass commonsense laws to combat the epidemic of gun violence. https://t.co/qkMEGKhsqH