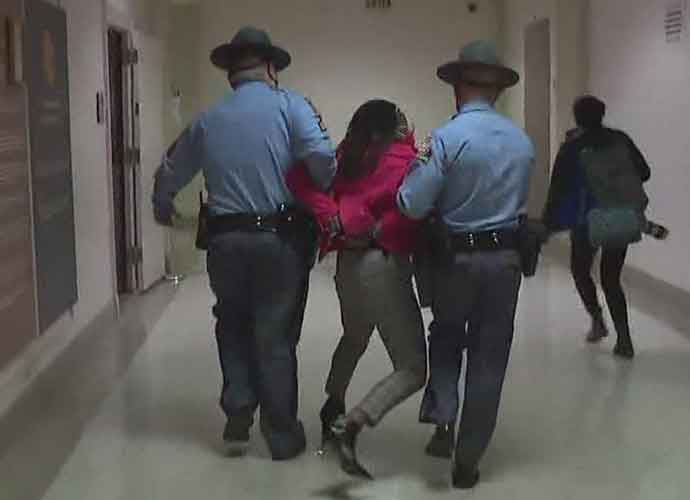 Georgia state Rep. Park Cannon was pulled out of the state’s Capitol building and arrested on  Thursday for trying to observe the signing of the state’s new suite of voting restrictions hastily passed through the Senate this week. A video shows several police officers pushing Cannon while she is retrained.

Why are the State Patrol arresting a State Representative during session? #gapol pic.twitter.com/lzs5EW78t7

Cannon was knocking on Gov. Brian Kemp‘s door while he signed the voting restrictions into law. The governor decided to sign the bill behind closed doors in a highly irregular process.

In a statement Thursday night, Georgia State Patrol wrote that at 6:33 p.m. Rep. Cannon “was beating on the door to the Governor’s Office,” and after being told to stop, she continued. “Rep. Cannon refused to stop knocking on the door. Rep. Cannon was placed under arrest and escorted out of the Capitol.” The report, however, did not write that Cannon was retrained with handcuffs. The report continues that Cannon “did knowingly and willfully hinder Officer E. Dorval and Officer G. Sanchez of the Capitol PD, a law enforcement officer in the lawful discharge or the officer’s official duties by Use of Threats of Violence, violence to the person of said officer by stomping on LT Langford foot three times during the apprehension and as she was being escorted out of the property. The accused continued on kicking LT Langford with her heels.”

For knocking on Kemp’s door, Cannon now faces two felony charges including felony obstruction and preventing or disrupting general assembly session. In an affidavit from the incident, Cannon’s charge of disrupting general assembly session is justified by saying the representative “knowingly and intentionally did by knocking the governor’s door during session of singing [sic] a bill.”

Cannon is represented by attorney Gerald Griggs. “We are getting her out of jail currently,” he said. “We are gathering information on the case as well. There are multiple videos and we are in contact with the DA.”