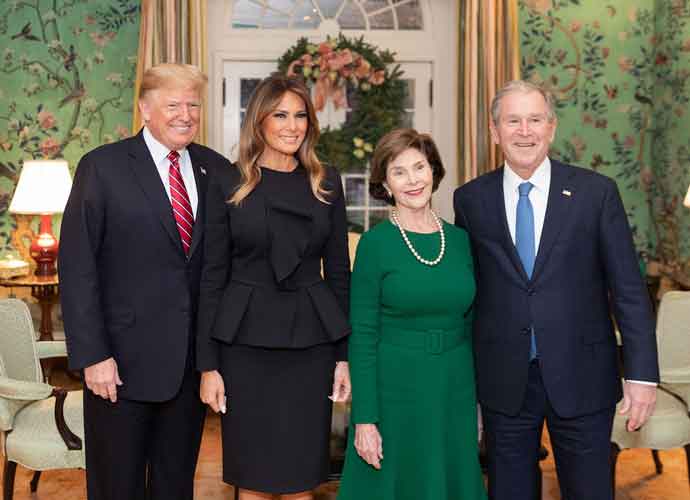 The Trumps & the Bushes

Several prominent, longtime Republicans are considering not supporting incumbent Donald Trump in November, and some are weighing if and how they should announce their intentions publicly.

According to a report by the New York Times, former President George W. Bush and Sen. Mitt Romney (R-Utah) will not support Trump’s reelection in November. And Cindy McCain, the widow of Sen. John McCain (R-Arizona), will likely support former Vice President Joe Biden, but may remain quiet about it due to one of her sons considering a run for office.

Among those who have publicly announced their disapproval of Trump include former Secretary of State Colin Powell, who told CNN on Sunday that he will be voting for Biden.

Longtime GOP Rep. Francis Rooney (R-Florida) hasn’t voted for a Democrat in decades but will vote for Biden because the sitting president is “driving us all crazy.”

“What he’s always been is not scary,” said Rooney, who is retiring and unconcerned with his reelection chances. “A lot of people that voted for President Trump did so because they did not like Hillary Clinton. I don’t see that happening with Joe Biden — how can you not like Joe Biden?”

The resistance to supporting Trump comes after former Defense Secretary Jim Mattis‘s scathing criticism of the president and Sen. Lisa Murkowski‘s (R-Alaska) admission that she is “struggling” to decide whether or not to vote for Trump in the fall.

Military officials have spoken out against the president as well, particularly as Trump’s handling of the coronavirus pandemic has affected the Navy.

“This fall, it’s time for new leadership in this country — Republican, Democrat or independent,” William McRaven, a retired Navy admiral who led the raid that killed Osama bin Laden, told the Times. “President Trump has shown he doesn’t have the qualities necessary to be a good commander in chief.”

McRaven continued: “As we have struggled with the Covid pandemic and horrible acts of racism and injustice, this president has shown none of those qualities. The country needs to move forward without him at the helm.”

However, Trump still has a loyal base of followers. He also has the full support of many more Republicans, such as Senate Majority Leader Mitch McConnell (R-Kentucky), than he did during the 2016 Republican primary.

Biden is eager, however, to win over any Republicans wavering between the two candidates and plans to roll out a Republicans for Biden coalition after he has unified his own party.