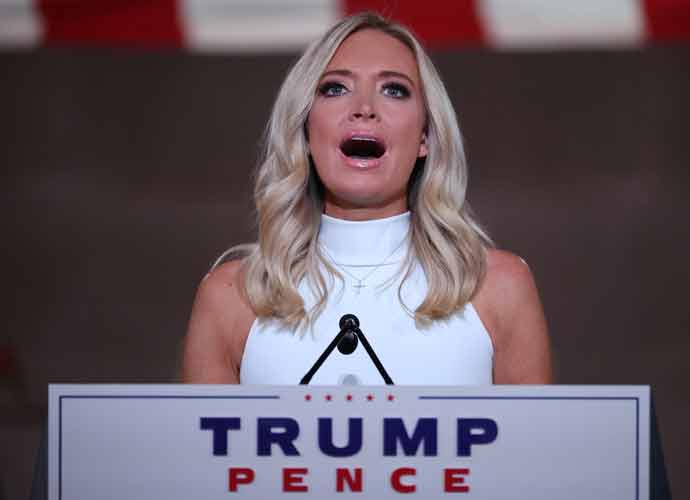 WASHINGTON, DC - AUGUST 26: White House Press Secretary Kayleigh McEnany pre-records her address to the Republican National Convention from inside an empty Mellon Auditorium on August 26, 2020 in Washington, DC. The novel coronavirus pandemic has forced the Republican Party to move away from an in-person convention to a televised format, similar to the Democratic Party's convention a week earlier.

Former Press Secretary Kayleigh McEnany stated she “never lied” to the press during her time in the White House under former President Donald Trump.

I am blown away by the incredible number of young conservative women who showed up this weekend. Just… WOW!

The enthusiasm, faith, and intelligence of these women was amazing. Well done @TPUSA #YWLS2021 https://t.co/R7LQlVIZ3o

McEnany spoke at the Young Women’s Leadership Summit, where she went into detail about her time serving Trump. She explained her relationship with the press and talked about a moment when the press questioned whether she had lied to them.

McEnany’s immediate response was “no… and I never did.” She revealed that faith, motherhood and education all prepared her for the job. The former press secretary asserted that she always accurately sourced the information she announced from the podium. She used the motto “offense only” while in adopting an assertive attitude towards handling the press.

Multiple outlets have fact-checked McEnany and caught her making misleading statements to the press in a number of instances.