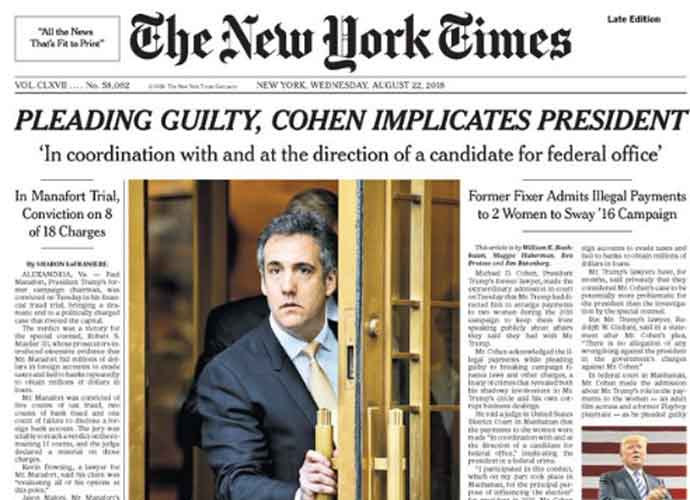 Tuesday afternoon brought the “worst hour” yet for President Donald Trump of his tenure in office – and the news splashed across front pages of most major newspapers both national and international.

The guilty pleas of Trump’s longtime personal attorney, Michael Cohen, and Trump’s former campaign manager, Paul Manafort got top billing. Beside tax and bank fraud, Cohen admitted in court that he violated campaign finances, arranging payments to silence two women who claimed affairs with then-candidate Trump. Within minutes from each other, Manafort was convicted of eight counts of tax and bank fraud. Both men had close ties to the president and leave the question how much Trump was involved. In fact, Cohen implicated the president directly, saying that he kept information that would have harmed Trump from becoming public during the 2016 election cycle “in coordination and at the direction of candidate for federal office.”

The New York Times made Cohen’s statement about the President to their banner headline.

Here’s the front page of The New York Times 8/22/2018. Read our coverage from a long, busy day of news here: https://t.co/StRCWRYlLj pic.twitter.com/8B5pZZK8Mb

In a full page special, the Washington Post reported about the “squeeze on Trump” after the two convictions.

And here is the front page of tomorrow’s @washingtonpost: pic.twitter.com/sDmg1WVFlI

The Wall Street Journal, the Miami Herald and USA Today also reported the news on their front pages, pointing out the guilty pleas of former Trump advisers and calling it “one-two punch for Trump administration” or saying the “legal spotlights turns on Trump.” The New York Daily News even called Manafort and Cohen the “President’s henchmen.”

Take an early look at the front page of The Wall Street Journalhttps://t.co/5xQPDPcm8q pic.twitter.com/l325VslgCy

Good morning from the newsroom. Here is Wednesday’s front page. Keep up with the news at https://t.co/uj677PKxPj pic.twitter.com/i0Rx7JQjJ2

Even major international newspapers made the double blow on the president to their lead. The U.K.’s Guardian called Tuesday Trump’s “worst hour” of his presidency, France’s Le Monde said that Trump was shaken by the judicial setbacks of two friends and Canada’s National Post called it the “Hush-Money Ploy.”