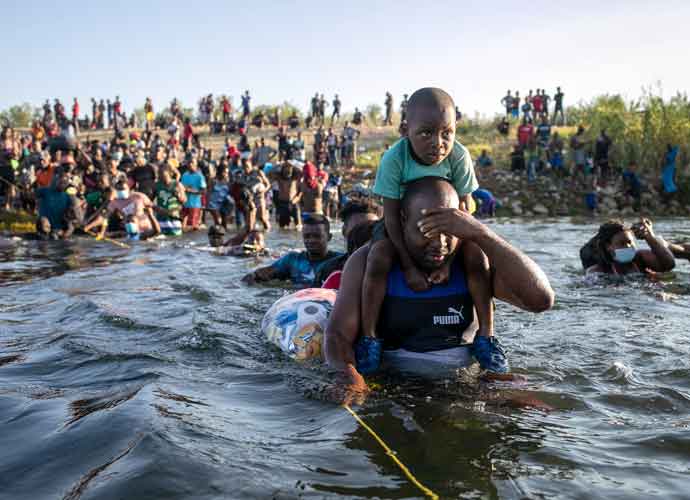 CIUDAD ACUNA, MEXICO - SEPTEMBER 20: Haitian immigrants cross the Rio Grande back into Mexico from Del Rio, Texas on September 20, 2021 to Ciudad Acuna, Mexico. As U.S. immigration authorities began deporting immigrants back to Haiti from Del Rio, thousands more waited in a camp under an international bridge in Del Rio and others crossed the river back into Mexico to avoid deportation. (Photo by John Moore/Getty Images)

The U.S. Department of Homeland Security will begin an investigation into the “extremely troubling” images of Border Patrol agents on horseback dispersing Haitian migrants.

“The Department of Homeland Security does not tolerate the abuse of migrants in our custody and we take these allegations very seriously. U.S. Customs and Border Protection’s Office of Professional Responsibility is investigating the matter and has alerted the DHS Office of Inspector General,” said a department spokesperson.

Department personnel will be deployed to Del Rio, Texas to monitor border officials and ensure their behavior is “consistent with applicable policies and training and the Department’s values,” according to Homeland Secretary Alejandro Mayorkas.

In one video, an agent tells a Haitian migrant: “This is why your country’s sh–, because you use your women for this.”

White House press secretary Jen Psaki commented on the matter during a briefing Monday. “I don’t think anyone seeing that footage would think it was acceptable or appropriate,” she said.

Rep. Bennie Thompson (R-Mississippi) condemned the mistreatment of Haitian migrants. “I call on Secretary Mayorkas to take immediate action to hold those responsible accountable and ensure that all migrants are treated in accordance with the law and basic decency, as this Administration has promised to do since day one,” Thompson said.

Viral TikTok Videos With Vague Warnings Shut Down Schools Across The U.S.