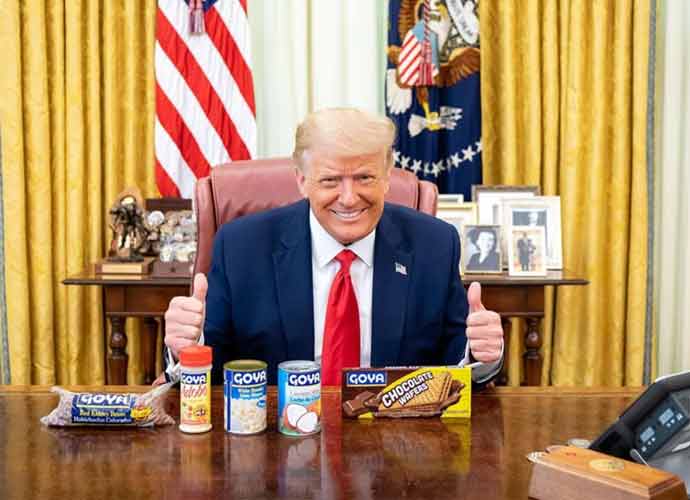 Trump poses in Oval Office with Goya products after calls for a boycott (Image: Twitter)

Goya’s board of directors voted to censure CEO Robert Unanue due to his public comments in support of former President Donald Trump and his unsubstantiated claims of voter fraud.

Due to his recent most recent controversial remarks that questioned the legitimacy of the November election, Unanue will no longer be allowed to speak to the media about politics or the company itself, without the board’s permission.

A majority of Goya shareholders favor removing Unanue from the company altogether, but have been prevented from doing so by the dynamics of the company. Some Unsnue family members have received threats because of the CEO’s comments.

Unanue confirmed in an interview the New York Post that he would no longer be speaking publicly about politics or religion.

“Independently, I’ve made the decision to lower the temperature and walk away from speaking about politics and religion,” Unanue said. “I realize it’s important because of the diverse views of the company and our market.”

Unanue has a history of broadcasting his political opinions to the public.

On inauguration day, Unanue appeared on Fox Business’ morning show and told anchor Maria Bartiromo that there was a “war coming” and that Joe Biden‘s election was “unverified.”

“They accomplished what they set out to do, which was get President Trump out of the way,” he said. “I think this is mission accomplished, by the unions, the partnership, the conglomerate of social media, big tech, big media and big government. There is a war coming, now that the president is leaving today, they’re still coming after the United States, the working class,” he continued.

Unanue’s praise of Trump also caused him to receive backlash from a number of leading Hispanic politicians, including Rep. Alexandria Ocasio-Cortez (D-New York) and former Obama cabinet member Julian Castro, and leading to a boycott of Goya foods.