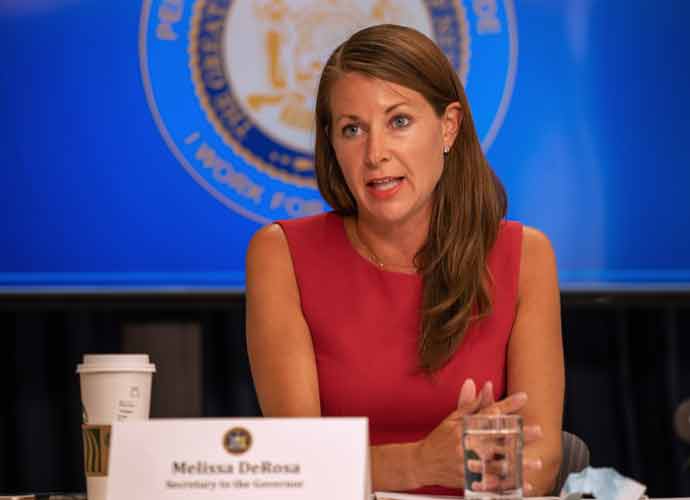 NEW YORK, NY - JULY 6: New York Secretary to the Governor Melissa DeRosa speaks during a COVID-19 briefing on July 6, 2020 in New York City. On the 128th day since the first confirmed case in New York and on the first day of phase 3 of the reopening, Gov. Cuomo asked New Yorkers to continue to be smart while citing the rise of infections in other states. (Photo by David Dee Delgado/Getty Images)

DeRosa, who has worked with the governor since 2013, has been widely recognized as Cuomo’s most important adviser, especially after she became a prominent figure nationwide when she was seated next to him throughout the pandemic briefings last year.

“It has been the greatest honor of my life to serve the people of New York for the past 10 years,” she said in a statement. “New Yorkers’ resilience, strength, and optimism through the most difficult times has inspired me every day.”

“Personally, the past two years have been emotionally and mentally trying,” she added, not defining the exact factors that gave her trying moments. “I am forever grateful for the opportunity to have worked with such talented and committed colleagues on behalf of our state.”

In her statement, DeRosa did not mention Cuomo or the scandal surrounding his office.

The former adviser was also one of several Cuomo staffers subpoenaed by James. From the final report the Attorney General released last week, DeRosa was mentioned 187 times, more than anyone besides Cuomo.

Following her resignation, two of 11 victims who accused Cuomo of sexual harassment denounced DeRosa’s resignation as a cowardly move.

“Ms. DeRosa was Cuomo’s enabler-in-chief and is jumping ship only when she sees no other way to save herself,” Alyssa McGrath and Virginia Limmiatis said in their joint statement through their attorney Mariann Wang.

“Her resignation isn’t enough: she still refuses to take responsibility for her role in Cuomo’s unlawful conduct.”