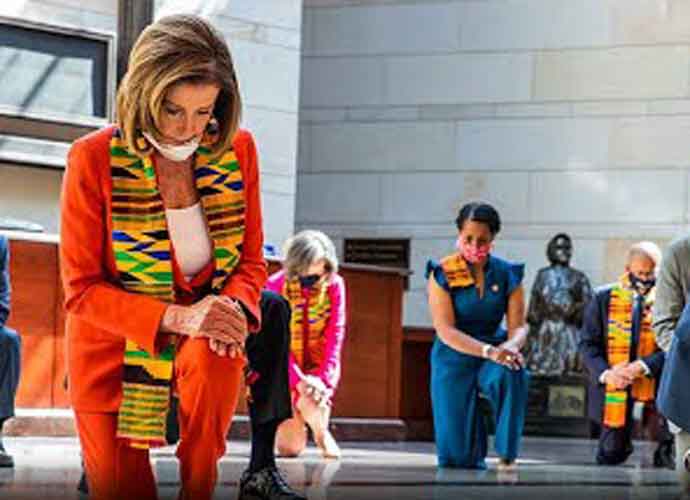 After kneeling for George Floyd, the African American man whose fatal arrest sparked the nationwide protests, and reading the names of Floyd and many other victims of police brutality, House and Senate Democrats revealed they are introducing legislation to reform the police.

“The martyrdom of George Floyd gave the American experience a moment of national anguish as we grieve for the black Americans killed by police brutality,” House Speaker Nancy Pelosi (D-Calif.) said at a press conference.

She also discussed the need for the “transformative structural” change, talking about the consequences of slavery in the U.S.

“The world is witnessing the birth of a new movement in our country,” Rep. Karen Bass (D-California) told reporters, “People marching to demand not just change but transformative change that ends police brutality, that ends racial profiling and ends the process of denying Americans the right to have the ability to sue when they have been injured by an officer.”

The bill would create a national registry of individual officers’ conduct. It is also set to make it easier to prosecute officers.

The bill would introduce racial training to limit cultural and racial biases among officers. It also would change the standard for the use of force – officers will now need to prove that the use of force was necessary during an arrest.

It has been the third week of protests, following the death of Floyd, when a white Minneapolis police officer, Derek Chauvin, knelt on his neck. Chauvin has since been charged with second-degree murder.

Nancy Pelosi Travels To Taiwan After Threats From China