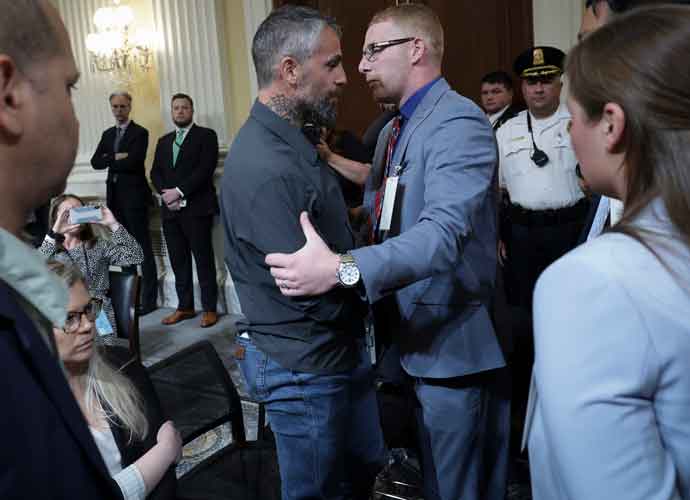 WASHINGTON, DC - JULY 12: Stephen Ayres (C), who entered the U.S. Capitol illegally on January 6, 2021, greets former Washington Metropolitan Police Officer Michael Fanone at the conclusion of the seventh hearing by the House Select Committee to Investigate the January 6th Attack on the U.S. Capitol in the Cannon House Office Building on July 12, 2022 in Washington, DC. The bipartisan committee, which has been gathering evidence for almost a year related to the January 6 attack at the U.S. Capitol, is presenting its findings in a series of televised hearings. On January 6, 2021, supporters of former President Donald Trump attacked the U.S. Capitol Building during an attempt to disrupt a congressional vote to confirm the electoral college win for President Joe Biden. (Photo by Kevin Dietsch/Getty Images)

Capitol Rioter Stephen Ayres Testifies To Jan. 6 Committee: ‘Felt Like I Had Horse Blinders On’

Stephen Ayres, a former President Donald Trump supporter who participated in the Capitol attack on January 6, 2021, testified in the House select committee’s public hearings, telling them he no longer believed the 2020 election was rigged.

“It makes me mad because I was hanging on every word [Trump] was saying,” he added.

He testified that he lost his job and had to sell his home because he had trusted in conspiracies furthered by Trump and his allies.

Ayres, who is not a member of either the far-right Proud Boys or Oathkeepers groups, had not planned to attend the march on the Capitol. After seeing Trump at the “Stop the Steal” rally on the Ellipse, he said he was upset.

“It was what basically got me to come down here,” he said, adding that he had hoped the president would join his supporters at the Capitol.

At the time, he said he was supportive of then-Vice President Mike Pence using his powers as the overseer of the electoral count in front of a joint session of Congress to overturn the election.

He left when Trump issued a statement asking his supporters to leave the Capitol.

“Take the blinders off, and make sure you step back and see what’s going on before it’s too late,” added Ayres in warning to others who support the former president.

Ayres is awaiting sentencing which has been scheduled for September 13.