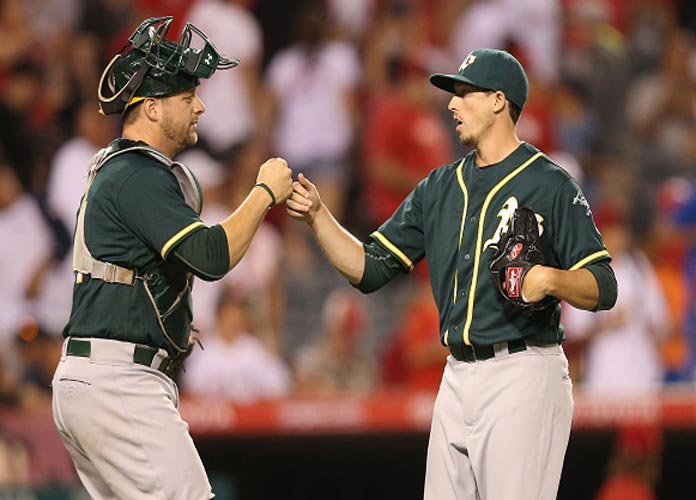 ANAHEIM, CALIFORNIA - AUGUST 04: Closer Ryan Dull #66 and catcher Stephen Vogt #21 of the Oakland Athletics celebrate after Dull got the final out of the 10th inning to pick up the save against the Los Angeles Angels of Anaheim at Angel Stadium of Anaheim on August 4, 2016 in Anaheim, California. The As won 8-6 in 10 innings. (Photo by Stephen Dunn/Getty Images)

California’s state lawmakers secured about $280 million from the state budget that could be invested into the baseball stadium project in downtown Oakland for the A’s.

Gov. Gavin Newsom (D-California) and state legislators quietly passed the funds a few weeks ago, and the budget was finally unveiled at the Oakland City Council vote Tuesday.

The Oakland City Council has agreed to pass a nonbinding development agreement with the A’s for a new stadium at Port of Oakland’s Howard Terminal, a deal that could decide whether the team will remain in Oakland. The team has represented the city for 53 years, but the contract will expire in 2024.

Tuesday’s 5-1 vote will allow both the city and the baseball team to continue the negotiations related to the new stadium project.

And now, it’s up to team officials to decide if they would like to move forward.

Prior to the meeting, the team officials said Friday the city’s offer was about $350 million less than what they need.

At Tuesday’s meeting, city official Betsy Lake said that Oakland will make sure that the gets reimbursed for $352 million of the infrastructure budget.

“We believe the city has solved for the issue the A’s identified as most critical … We believe the A’s can and should agree with these terms,” Lake said during the meeting.

The budget may be related to the infrastructure funds that Newsom has secured for the Port of Oakland last month, which was $279.5 million.

California has received tens of billions of dollars from the federal pandemic recovery fund. A robust stock market and high tax revenues from California’s wealthy residents have resulted in the state having a record budget surplus this year.