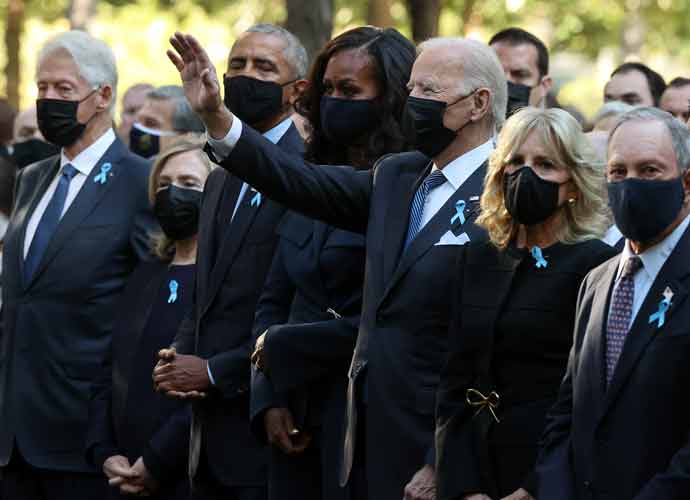 NEW YORK, NEW YORK - SEPTEMBER 11: President Joe Biden (C) waves as he is joined by (L-R) former President Bill Clinton, former First Lady Hillary Clinton, former President Barack Obama, former First Lady Michelle Obama, First Lady Jill Biden and former New York City Mayor Michael Bloomberg, during the annual 9/11 Commemoration Ceremony at the National 9/11 Memorial and Museum on September 11, 2021 in New York City. During the ceremony six moments of silence were held, marking when each of the World Trade Center towers was struck and fell and the times corresponding to the attack on the Pentagon and the crash of Flight 93. The nation is marking the 20th anniversary of the terror attacks of September 11, 2001, when the terrorist group al-Qaeda flew hijacked airplanes into the World Trade Center, Shanksville, PA and the Pentagon, killing nearly 3,000 people. (Photo by Chip Somodevilla/Getty Images)

President Joe Biden on Saturday spent the 20th anniversary of the September 11 attacks by visiting all three sites where hijacked planes crashed that killed nearly 3,000 people in 2001.

Biden and First Lady Jill Biden first visited Ground Zero in Manhattan, where the World Trade Center’s twin towers once stood before the attack. The couple then went to Shanksville, Pennsylvania, and returned to Washington to visit the Pentagon, where the third attack took place.

Biden spent the day commemorating in silence. Though he didn’t give a speech at any of the sites, he released a video statement on Friday to express his condolences.

“It’s so hard. Whether it’s the first year or the 20th, children have grown up without parents and parents have suffered without children,” Biden said. “We also saw something all too rare: a true sense of national unity.”

“The president felt it was important to visit each of these three sites to commemorate the lives lost, the sacrifices made on a day that has impacted millions of people across the country but certainly many people in those communities,” White House spokesperson Jen Psaki said on Friday.

Former President Donald Trump didn’t show up at any sites, though he released a video statement through his PAC to send his condolences.

“For the great people of our country, this is a very sad day. September 11 represents great sorrow for our country,” said Trump. “Many things were displayed that day, including, most importantly, the bravery of our police, fire and first responders of every kind.”

“It is also a sad time for the way our war on those that did such harm to our country ended last week,” he added. “The loss of 13 great warriors and the many more who were wounded should never have happened.”