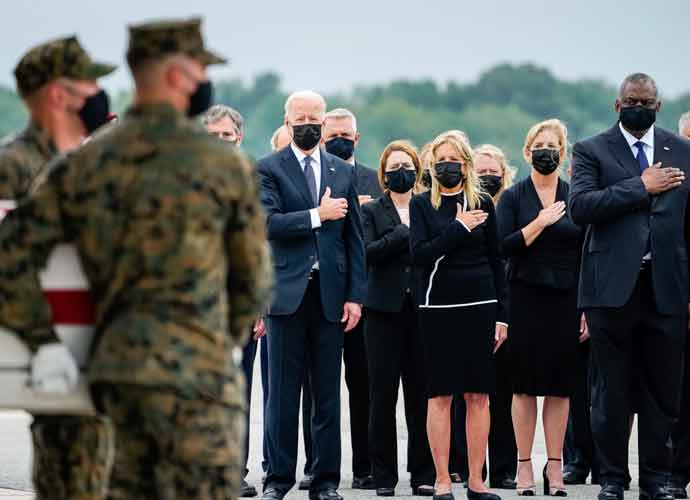 On Sunday, President Joe Biden and First Lady Jill Biden paid respects to the U.S. service members who were killed by the suicide bombers at Kabul airport on Thursday.

The Bidens joined the dignified transfer ceremony along with the military personnel and the families of the fallen.

In the final few days of the U.S. military in Afghanistan, the 13 young service members were among the 180 people who fell victim to the attack conducted by the terrorists affiliated with ISIS-K.

“The 13 service members that we lost were heroes who made the ultimate sacrifice in service of our highest American ideals and while saving the lives of others,” Biden said in a statement Saturday. “Their bravery and selflessness has enabled more than 117,000 people at risk to reach safety thus far.”

Five of the 13 fallen members were just 20 years old. They were born not long before the 9/11 attack, the very incident that started the longest war in the history of the United States.

The Pentagon announced Sunday that the U.S. military conducted a drone strike in Kabul, successfully blowing up a van that had multiple suicide bombers inside, the same day that the ceremony happened.

The 13 service members that we lost were heroes who made the ultimate sacrifice in service of our highest American ideals and while saving the lives of others. Our sacred obligation to the families of these heroes will last forever. pic.twitter.com/lPx4a4ebS7