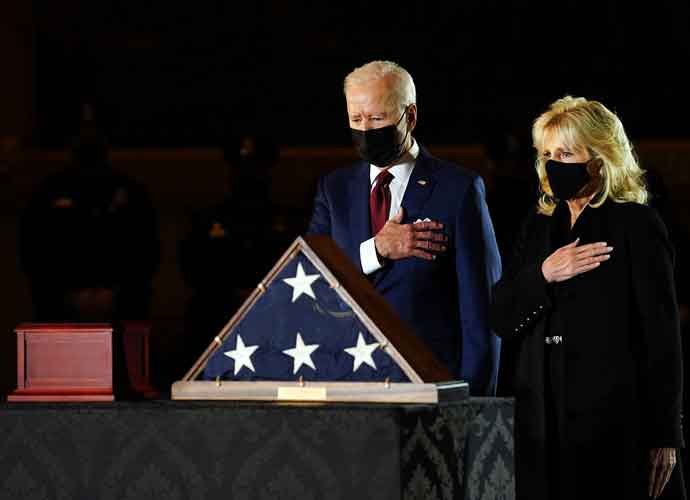 Biden Calls For Gun Regulation On Anniversary Of Parkland Massacre: ‘The Time To Act Is Now’

On the third anniversary of Parkland massacre that claimed the lives of 14 student and three staff members at Marjorie Stoneman Douglas High School, President Joe Biden offered condolences to families forever changed by the violence.

“In seconds, the lives of dozens of families, and the life of an American community, were changed forever,” Biden said in a statement released Sunday.

Biden also used this opportunity to urge Congress to strengthen gun regulations. Specifically, he  called on House Members and Senators to introduce mandatory background checks on gun sales and a formal ban of assault weapons. Biden also aims to outlaw high-capacity gun magazines and create avenues that make gun manufacturers liable when their weapons are used in violence or killings.

“We owe it to all those we’ve lost and to all those left behind to grieve to make a change. The time to act is now,” said Biden.

Florida Gov. Ron DeSantis (R) asked Floridians to join him in a state-wide moment of silence at 3 p.m. Sunday in remembrance of the shooting. In a following statement, DeSantis said, “the Parkland community is resilient in the wake of tragedy, reminding us just how strong and united Floridians can be in the face of such devastating loss.”

The Republican governor, however was unwilling to match Biden’s call for gun regulation. DeSantis instead praised new school safety systems including new panic buttons and revival of youth violence-prevention programs in his state.

Ryan Petty, father of Alaina Petty who was killed in the Parkland massacre, who is now a member of the Florida School Board, said in an interview that gun regulation alone will not stop tragedies. “It’s wrong to focus on the weapon,” he said. “For those who understand what happened that day, there were mistakes. This was the most preventable school shooting in the history of our country. The warning signs were there. It was clear the killer had intentions to attack the school.” Petty is referencing that the FBI was already monitoring the killer in the Parkland massacre, and the killer’s public social media showed troubling signs that he could act violently against the school.

Manny Diaz, chairman of the Florida Democratic Party, however, agreed with Biden that legislation is a meaningful step toward change. “The passage of time has done little to heal the heartbreak we felt upon hearing the shocking news three years ago today, nor dulled our sense of outrage at the lack of consequential legislative action from lawmakers since that horrible morning — laws that would prevent another Parkland from ever happening again.”

When Biden was vice president, then President Barack Obama fought for enhanced gun regulations in the wake of the Sandy Hook massacre in 2012. “This Administration will not wait for the next mass shooting to heed that call. We will take action to end our epidemic of gun violence and make our schools and communities safer,” Biden said echoing Obama.