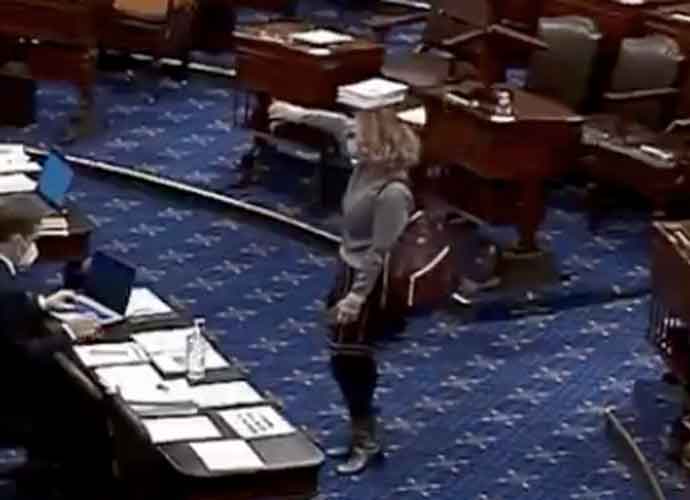 Sen. Kyrsten Sinema (D-Arizona) did a little dance while voting no on an amendment to increase the federal minimum wage to $15 per hour on the Senate Floor on Friday. Sinema, a former Green Party advocate, has become an increasingly unpredictable wild card since she began her freshman Senate term in 2018. Seemingly taking pride in her vote, Sinema crooked her knee, tilted her head and pointed her thumb down to vote down the $15 per hour minimum wage increase while carrying an expensive bag.

The amendment to increase the federal minimum wage to $15 per hour was formally not allowed by the Senate Parliamentarian, but the amendment remained in President Joe Biden‘s American Rescue Plan for a vote anyway.

“It’s just beyond my understanding that someone could go from a Code Pink activist to saying, ‘Yeah, there are some good things Trump did and I vote with him sometimes,’” Arizona activist Jenise Porter said about Sinema’s move toward centrism. Porter helped draft a resolution to censure Sinema in 2019 after her voting pattern became erratic.

To be clear, her state, Arizona overwhelmingly wants &15/hr. https://t.co/knKM2T17J5

“She realized that she could get stuff done working the middle and it had more impact,” member of Arizona State Rep. Robert Meza (D) told the New York Times. Meza worked with Sinema from 2004-2010 on a progressive agenda. “The left-wing groups, the business community — they started listening more to her. She realized, ‘Hey, I actually have more power in the middle.’”

Spokesperson for Sinema Hannah Hurley said in a statement Friday, “Commentary about a female senator’s body language, clothing, or physical demeanor does not belong in a serious media outlet.” Hurley later tweeted the same comment.

I stand by what I said: commentary about a female Senator's body language, clothing, or physical demeanor does not belong in a serious media outlet.

Sinema herself also released a statement on her ‘no vote’ Friday saying, “The Senate should hold an open debate and amendment process on raising the minimum wage, separate from the COVID-focused reconciliation bill.”

“I understand what it is like to face tough choices while working to meet your family’s most basic needs. I also know the difference better wages can make,” she explained. “I will keep working with colleagues in both parties to ensure Americans can access good-paying jobs, quality education, and skills training to build more economically secure lives for themselves and their families.”