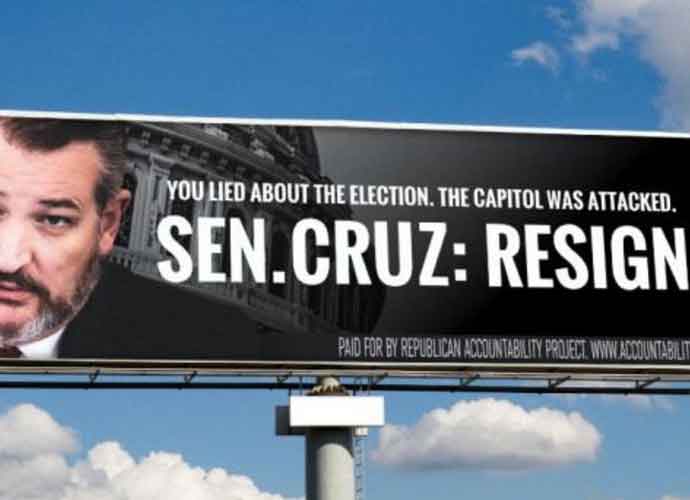 "You lied about the election. The Capitol was attacked. Sen. Cruz: Resign," one the Republican Accountability Project billboard reads that targets Cruz.  (Photo: Twitter)

An anti-Trump super PAC is launching a million-dollar billboard campaign calling on 12 Republican Congressmen to resign.

The PAC, the Republican Accountability Project, is an organization that was formed in January, which is targeting GOP lawmakers who voted against the Electoral College certification last month while attempting to block President Joe Biden from taking office.

In addition, it has also raised over $50 million to help reelect GOP lawmakers who vote to impeach former President Donald Trump for inciting the Jan. 6 insurrection.

“You lied about the election. The Capitol was attacked. Sen. Cruz: Resign,” one the Republican Accountability Project billboard reads that targets Cruz.

The Texas Republican had been among leading lawmakers who helped spread Trump’s false voter fraud claims after losing to Biden.

In a 232-197 vote, the Democratic-led House voted to convict Trump for incitement of insurrection  for encouraging thousands of supporters during an incendiary speech in Washington, D.C. before the Capitol Hill riots.

Ten House Republicans, who are now targeted by the Republican Accountability Project, had joined all House Democrats in supporting impeachment.

“These representatives and senators helped incite the attack on the Capitol by spreading lies about the election,” said Sarah Longwell, the executive director of the Republican Accountability Project. “They have proved that they are unfit to hold office. They should be nowhere near power.”