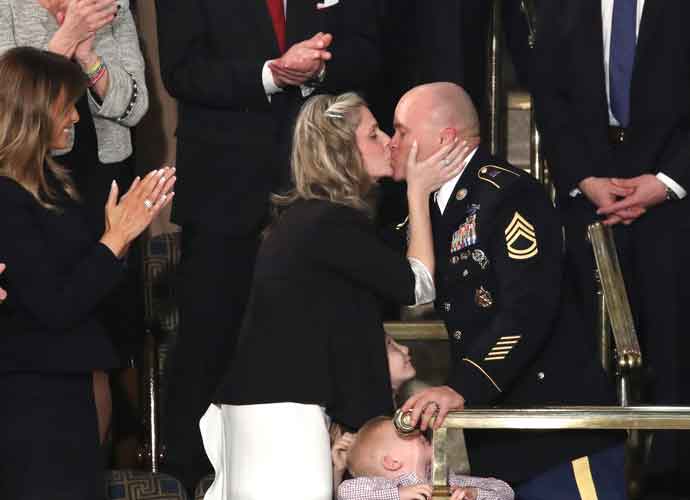 WASHINGTON, DC - FEBRUARY 04: Sgt. 1st Class Townsend Williams kisses his wife Amy after surprising his family by returning early from deployment in Afghanistan during the State of the Union address in the chamber of the U.S. House of Representatives on February 04, 2020 in Washington, DC.

Military wife Amy William and her children got a huge surprise during the State of the Union Address when President Donald Trump announced her husband, Sergeant First Class Townsend Williams, had returned home and was there to see them.

In his call to bring more troops home, he praised military families like the Williams for their sacrifices. Amy, the North Carolina mother, according to Trump, “works full time, and volunteers countless hours helping other military families.”

The sergeant had been on his fourth deployment to the Middle East.

“Amy’s kids have not seen their father’s face in many months,” Trump said. “Amy, your family’s sacrifice makes it possible for all of our families to live in safety and peace — and we want to thank you.”

Read more about:
Donald Trump State of the Union