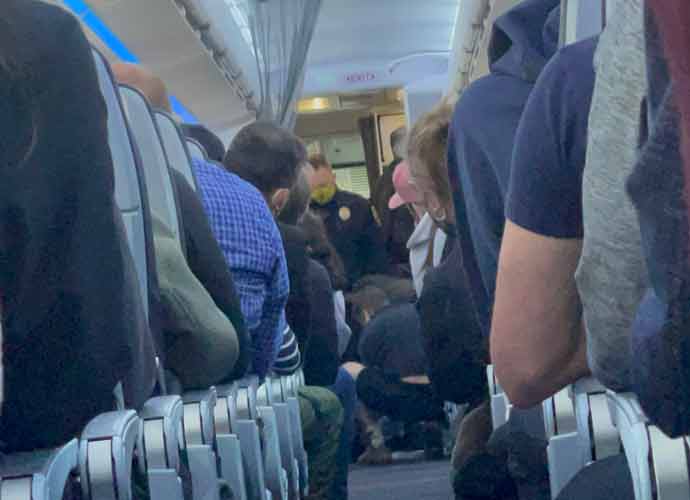 An American Airlines flight had to make an emergency landing after an unruly passenger charged the cockpit and tried to open the front passenger door.

The flight was headed from Washington, D.C. to Los Angeles, but diverted to Kansas City, Missouri when the passenger, who was a middle-aged man, started acting out.

“It felt like the plane was free falling and many feared the worst because people weren’t fully aware of what was unfolding,” one passenger wrote on Twitter.

Police have boarded flight #AA1775 from #LA to #DC which made an emergency and rapid landing in Kansas. Flight descended at 5000 fps. It felt like the plane was free falling and many feared the worst because people weren’t fully aware of what was unfolding pic.twitter.com/qyDHSrdUqF

A flight attendant was forced to use a coffee pot to strike the passenger in the head.

“He’s trying to get into the cockpit … We’ve got four passengers now trying to contain this gentleman,” said the pilot when asking for permission to land in Kansas City, according to a recording of the communications.

Flight attendants, with the help of other passengers, were able to subdue the man. After landing in Kansas City, the FBI took the unidentified passenger into custody and witnesses were interviewed.

Some of them shared their experience on Twitter as well.

Very scary! I was watching Dune. The lights were out. All of the sudden lights came on and several men stood up to rush to first class. I didn’t see the fight just the reaction of the men. I knew immediately something was wrong

Ya I was getting up to go to the bathroom and the flight attendant running full speed down the aisle and yelling to turn the lights on was slightly unnerving. Then the plane making a hard turn left and speeding up within a couple mins of that def told me something was happening.

The motive for the erratic behavior is still unclear. The Association of Professional Flight Attendants said they will continue to work with the Department of Transportation, the Federal Aviation Administration and Congress to ensure the safety of everyone on the aircraft and make sure that offenders are appropriately dealt with, they said in a statement.

Today, we witnessed another dangerous, life-threatening incident on an American Airlines flight from Los Angeles, CA, to Washington, D.C., when a passenger attempted to open the forward passenger door…1/3

Biden To Require COVID-19 Vaccination For All U.S. Airlines’ Staff