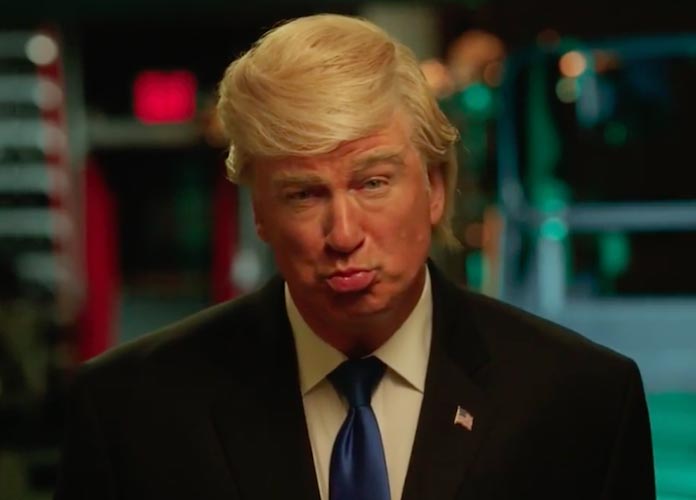 The 43rd season of Saturday Night Live aired on Saturday, and Alec Baldwin returned to play President Donald Trump in the first sketch, or Cold Open.

The skit mocked Trump’s response to Hurricanes Irma and Maria that have battered Puerto Rico.

Baldwin — who won an Emmy last month for his portrayal of the 45th President last season on SNL — began by making a phone call from the Oval Office to San Juan Mayor Carmen Yulin Cruz (played by Melissa Villasenor) after Press Secretary Sarah Huckabee Sanders (Aidy Bryant) put him in touch with her.

“Trust me, I know things are, as the locals say, ‘Despacito,'” said the 59-year-old actor, referencing the hit Spanish song by Puerto Rican artists Luis Fonsi and Daddy Yankee that has become the most-streamed song in the world and a hit this summer.

Over the weekend, Trump tweeted that Cruz had been displaying “poor leadership” in responding to the crisis on the island that his home to roughly 3.5 million people who have been hit by power outages and mass destruction. The President said Puerto Rico wants “everything to be done for them,” a statement that drew ire from Cruz and from many celebrities including Lin-Manuel Miranda, who hails from the commonwealth.

Baldwin also mocked the President’s criticism of NFL players kneeling for the national anthem by drawing a comparison between himself and the athletes.

“I love football, I could have played,” he said. “People say I remind them of an NFL player because I’m combative, I like to win and I might have a degenerative brain disease.

Also featured in the sketch were Kate McKinnon as Attorney General Jeff Sessions and Alex Moffat as Senator Chuck Schumer.

Ryan Gosling hosted the season premiere (his second time on the show) with musical guest Jay-Z.

Gal Gadot will host SNL next week with musical guest Sam Smith, while Kumail Nanjiani is scheduled to host on Oct. 14 with performer Pink.