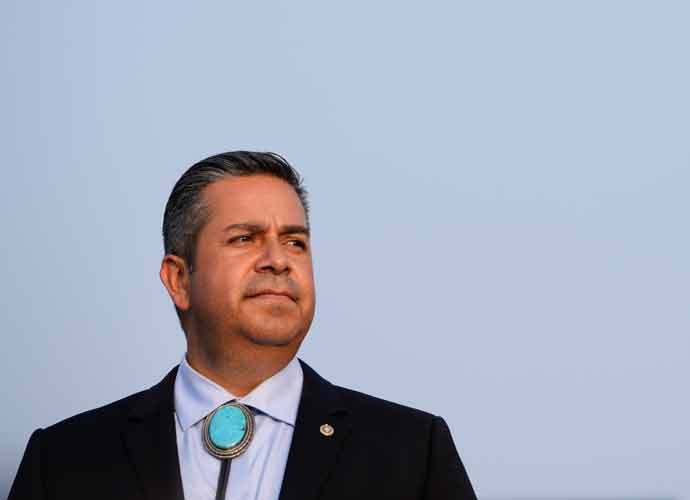 WASHINGTON, DC - SEPTEMBER 13: Sen. Ben Ray Lujan (D-NM) attends a rally about climate change issues near the U.S. Capitol on September 13, 2021 in Washington, DC. The League of Conservation Voters and Climate Action Campaign held the rally to urge the passage of the 'Build Back Better' legislation. (Photo by Drew Angerer/Getty Images)

Sen. Ben Ray Luján (D-New Mexico), 49, is recovering in the hospital after suffering from a stroke, his office said. He is expected to make full recovery.

He checked himself into Christus St. Vincent Regional Hospital in Santa Fe last week after experiencing dizziness and fatigue. He was transferred to the University of New Mexico Hospital where doctors performed decompressive surgery to alleviate the swelling.

This week, the Senate remains an even split with Republican Sen. Mitt Romney (Utah) out due to COVID-19, but Luján’s absence will give the Republicans a slim majority in the coming weeks which could hold implications for certain legislation and confirmation of President Joe Biden‘s Supreme Court nominee. Fifty-one votes are needed to confirm a nominee which means all Senate Democrats would need to support the nominee, along with tie-breaker Vice President Kamala Harris if the nominee does not garner any Republican support.

Biden said that he will announce his choice to replace Justice Stephen Breyer before the end of the month. Since Luján does not serve on the Senate Judiciary Committee, he would not be needed for work immediately after Biden makes his pick.

Senate Democrats voiced their concern for Luján when the news broke on Tuesday.

“It’s devastating. And the only silver lining is that there’ll be a path to a full recovery,” said Sen. Chris Murphy (D-Connecticut). “What a shock on an otherwise quiet afternoon.”

As for proceeding with work in the Senate, Murphy suggested that in the meantime they might focus on passing bipartisan legislation that is likely to be supported by some Republicans.

“We’re in a 50-50 Senate, for any of us, at any time. We saw when a member gets Covid what happens in terms of the schedule,” added Sen. Debbie Stabenow (D-Michigan). “We’re all human beings, something could happen at any time.”

It is unclear how long Luján’s recovery time will be.