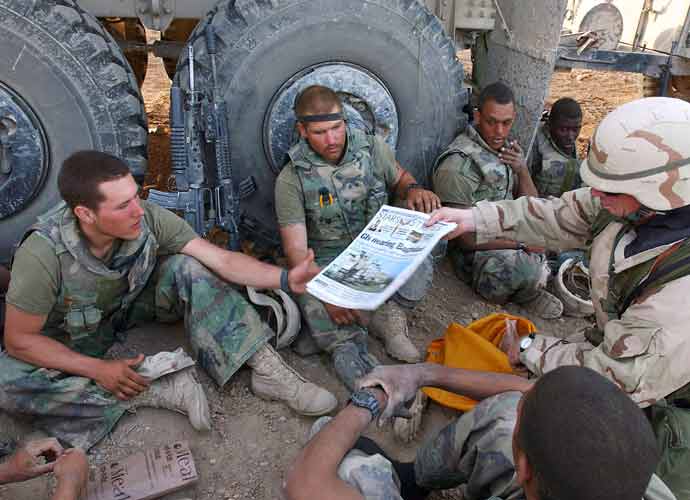 Stars And Stripes delivered to troops

After Attempting To Close ‘Stars And Stripes,’ Trump Reverses Himself & Vows To Fund Military Newspaper

President Donald Trump announced via Twitter on Friday that “The United States of America will NOT be cutting funding to @starsandstripes magazine under my watch. It will continue to be a wonderful source of information to our Great Military!”

The United States of America will NOT be cutting funding to @starsandstripes magazine under my watch. It will continue to be a wonderful source of information to our Great Military!

The news that the Trump Administration is continuing to fund the military’s independent newspaper comes right after the Pentagon said that it was pulling funding from Stars and Stripes – one of the major lifelines for American troops since the Civil War. The Defense Department instructed the Stars and Stripes publisher to discontinue the publication. In an unpublicized memo, the Pentagon delivered an order to map out a plan that would achieve a full dissolution by September 15.

In response to threats of removing funding, which date all the way back to February, a bipartisan group of 11 Democratic and four Republican senators urged the Defense Department not to pull funding, citing that the $15.5 million in federal funding needed to keep Stars and Stripes alive is only a fraction of the overall $700 billion budget. Although Stars and Stripes is editorially independent from the government, it depends on federal funding to stay afloat. The publication receives roughly 35% of its funding from the federal government, and there are major concerns surrounding whether the newspaper could survive on money earned through sales, subscriptions and advertising alone. As a result, the Trump Administration gets the final say in whether this news outlet will continue to reach its 1.3 million online readers.

This decision not to cut funding for the military’s independent news source follows a recent story from The Atlantic that Trump declared that he could not understand why wounded veterans be worthy of honor, referring to them as “losers” and “sucker.” Trump has repeatedly denied any that any such comments were made. The report also stated that Trump canceled a visit to the Aisne-Marne American Cemetery near Paris in 2018 over concerns that the rain would ruin his hair.