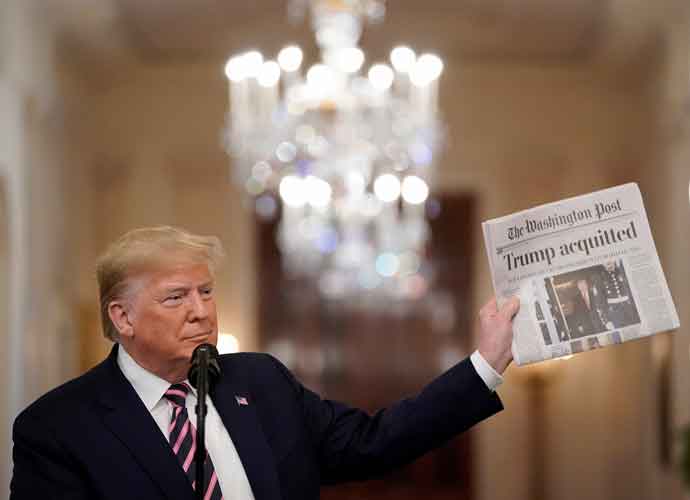 WASHINGTON, DC - FEBRUARY 06: U.S. President Donald Trump holds a copy of The Washington Post as he speaks in the East Room of the White House one day after the U.S. Senate acquitted on two articles of impeachment, ion February 6, 2020 in Washington, DC. After five months of congressional hearings and investigations about President Trump’s dealings with Ukraine, the U.S. Senate formally acquitted the president on Wednesday of charges that he abused his power and obstructed Congress. (Photo: Getty)

56% Of Americans Think Trump Should Be Barred From Federal Office, According To New Poll

A majority of Americans think former President Donald Trump should be convicted during his upcoming impeachment trial and barred from being able to hold a federal position in the future, according to a new ABC News/Ipsos poll conducted on Friday and Saturday.

The poll was conducted in both Spanish and English and has been weighted to “adjust for gender by age, race/ethnicity, education, Census region, metropolitan status, household income, and party identification,” the market research company said.

With a nationally representative probability sample of 508 respondents, the poll found 56 percent of Americans favored Trump’s conviction and barring from office. More than 9 in 10 Democrats supported both actions, while 8 in 10 Republicans opposed both.

Trump’s impeachment trial is scheduled to start at the beginning of this week after 10 House Republicans joined every Democrat voting to impeach the former president on charges that he incited the attack on the U.S. Capitol on January 6. Trump held a rally of supporters before they stormed the Capitol and disrupted the verification of Joe Biden‘s win in the Electoral College.

For the Senate to convict Trump, a two-thirds majority is required. In the event that 17 Republicans join Democrats and Trump is convicted, the Senate could vote a second time, requiring only a simple majority, to bar Trump from office for life.

The poll also probed feelings about the Biden administration’s response to the coronavirus pandemic.

Forty-nine percent said they support Biden moving forward with Democrats to pass a $1.9 trillion coronavirus relief package without support for Republicans. However, two in five respondents think Biden should cooperate with Congressional Republicans to get a smaller package.

Overall, two-thirds of respondents approve of Biden’s handling of the pandemic thus far.

With $76 Billion Budget Surplus, California To Send Out $500 Rebate Checks